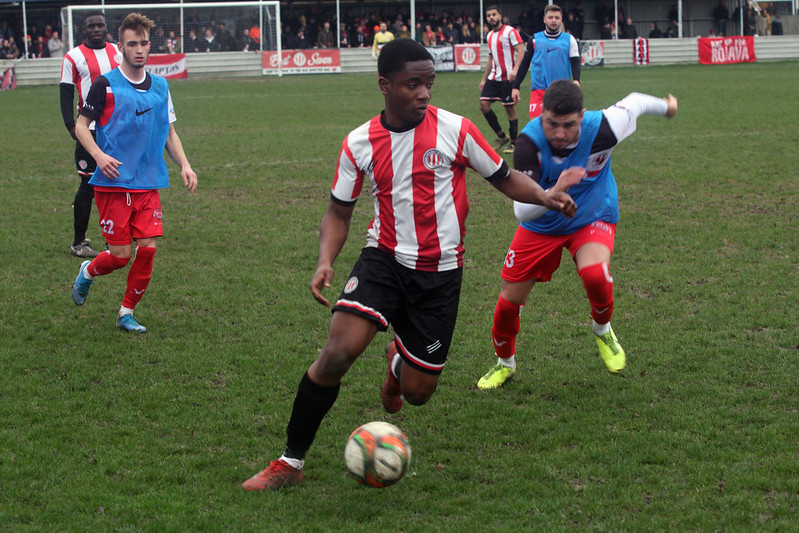 The men’s side lost their 100% home record in disappointing fashion, being pegged back by PFC Victoria with the last header of the ball.

It was the second time in two weeks the Tons had let a two goal lead slide after last weekend’s setback at Brentham.

The game was late in kicking off as the visitors had shown up with an all red kit. We had told them that we were at home and wear red. But they showed up with their red gear nevertheless.

We had to dish out some of our blue bibs. Like we were playing fives.

This has already become a bad omen in CCFC history.

Last season’s kit-forgetters Eastfield and FC Star both notched wins at the Stray Dog having failed the very basic requirement of showing up with appropriate clothes.

And it could have gone the same way on Saturday, when an out-of-sorts Clapton gifted their visitors enough chances to rack up a cricket score.

The first half was turgid. Victoria had the better of it overall. Their forward line were good with their feet, displaying neat dragbacks, twirls and stepovers.

But when they won a yard, their finishing was atrocious.

That said, a backline of Liam Smyth, Nick Loblack, Arshad Coowar and Dean Bouho was doing well to keep them at bay. Coowar was coolly rounding attackers. Supporters hearts were in mouths, but he kept on making them look silly.

However, the hero of the first half was Julian Austin. The midfielder won everything in the middle of the park with his extending legs and hanging-in-the-air leaps.

And when the ball broke to him on the edge of the area after some nice buildup on the left, he needed no second invitation to smash it into the bottom corner.

And Austin got a second just before half time. A shot from the right took a heavy deflection off a defender and trickled in at the near post.

In spite of second half Clapton chances, the lead felt very fragile. The game was still too open for the liking of those in red (without the bibs).

Austin had a couple of chances for his hattrick. He headed one Cemal Agdelen corner towards the near post. But the man on the line flicked away.

Then he had a fearsome strike from a tight angle after Lewis Owiredu had nicked the ball off their right back. But the keeper had a strong palm in the way.

Sherwin Stanley will have been kicking himself for not managing to get that crucial third goal. An attempted Owiredu nutmeg on the PFC keeper popped out to him with the goal at his mercy. But his mishit went past the post.

Eliot Crosbie replaced Stanley for a long-awaited comeback. He nearly marked it with a goal when a saved Owiredu shot trickled towards the goalline. Crosbie just couldn’t quite get there in time to force it in.

It’s becoming so common that it almost goes without saying, but Jack Francis pulled off a string of superhuman saves.

One attacker dribbled straight at him. Francis just plucked it off his laces. Then a PFC player burst down the right – with no Tons defenders to be seen – and squared to his pal at the back post. But Francis materialised and blocked.

“You’re not fit to wear our bibs” sung the cocky Clapton fans to the visitors.

But then the bib curse struck.

Perhaps knowing that they couldn’t beat Francis by conventional means, Victoria resorted to wild long shots. And this bore fruit when Darrell T Ditchburn (who sounds like he should be a misanthropic, maverick detective in a critically-acclaimed drama called ‘Ditchburn’) spanked an unstoppable drive into the top corner from long range.

Our sources tell us that the referee considered putting on the floodlights for the last three minutes. But seeing as they would have taken three minutes to get properly heated up, he didn’t see the point.

The visitors launched some desperate last ditch attacks. They popped up a cross to the far post where sub Bartek Kijowski was able to nod home the equaliser.

The blindingly obvious takeaway: Clapton’s promotion hopes rest on being able to land knockout blows on their rivals when they are on top.

Geoff Ocran and Sham Darr reflect on the game.

Dead heat between the guy who got Clapton’s two goals and the guy who stopped the opposition getting ten.