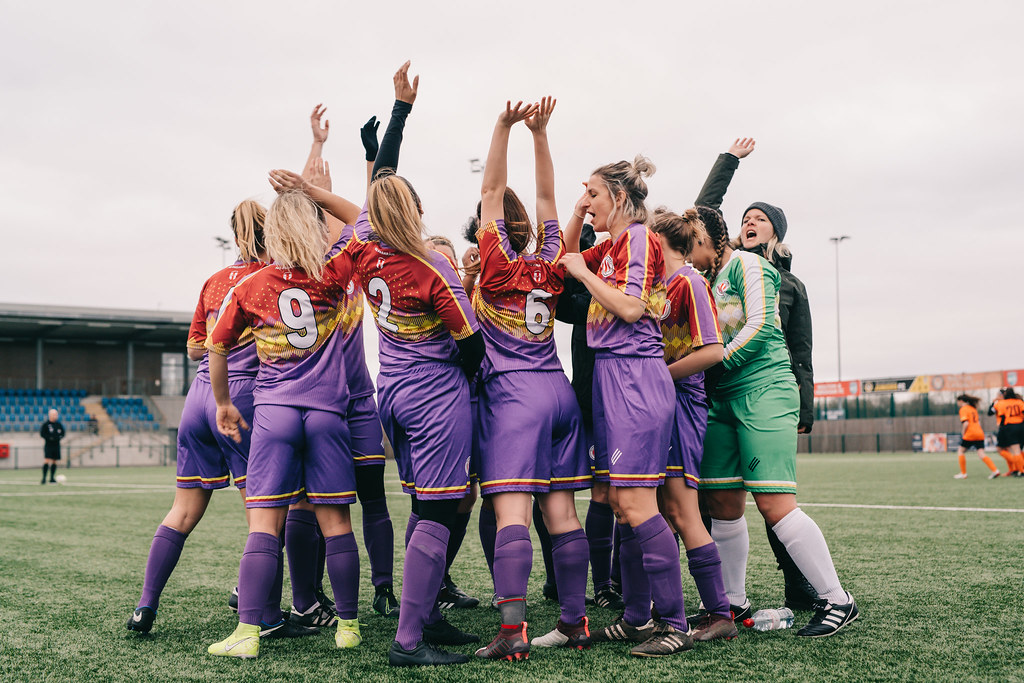 After 56 days without competitive football, it was finally time for our women’s team to play.

What awaited them was an away fixture against league leaders Walton Casuals, who have won every game so far this season.

After a bus journey which took roughly an hour and a half, the team and supporters arrived at the Xcel Sports Hub.

Once it was clear which pitch the game would be played on, one unnamed player was heard saying “Is this the pitch we’re playing on? Man, that is beautiful.”

The team who would take on Walton on this beautiful piece of plastic grass was slightly smaller than usual, with many players still not back from the holidays, and others having had succumbed to the winter flu.

It was also the first game for goalkeeper Susana Ferreira, who had first been out with an injury, and then cursed with a spell of postponed games.

After having walked out from the tunnel, the game unfolded much like the home leg. Clapton CFC started stronger, and after just a couple of minutes the Walton goalkeeper had to make a great save to clear a shot from Lucy Spours.

This seemed to be the wake up call Walton Casuals needed to get into the game. In the sixth minute, Walton was awarded a free kick, which sailed past the Tons’ midfield and onto the feet of their striker.

It bounced awkwardly for Ferreira, who was left wondering whether to run out or stick to her line, and Walton’s striker slotted it in.

1-0 up and Walton were dominating the game. The Christmas break seemed to have done nothing to slow their young players down, and they put both the Clapton defence and goalkeeper under a lot of pressure.

In the 26th minute, they scored their second goal of the game, a ball which trickled in just past Ferreira’s near post.

The Tons regrouped, and are not without chances in the last minutes of the first half. A midfield of Spours, Lucy Rolington, and Elena Holmes found the feet of front three Emily Link, Zhane Amoaten, and Naomi Scriven, who despite their best efforts were unable to find the back of the net.

To get some fresh legs into the game, coach Patrick McLaughlin had Flora Levy and Saskia Walker come on for Rolington and Holmes, who had both been working tirelessly for 40 minutes.

The second half started much like the first, with CCFC playing some beautiful team football. Walker found the feet of Scriven, who just about missed the goal, and Link sent a wonderful cross which found Amoaten, who was nudged off the ball.

While the Tons were the ones applying all the pressure these first minutes of the second half, Ferreira wasn’t left without a job. Walton found the target on several occasions, and Susana made an incredible string of saves.

Holmes came back on, this time for Amoaten, which meant that Walker took the spot up top.

In minute 62, defender Alice May Williams sent a ball forward, which bounced off a Walton defender and landed just in front of Walker.

Just like in the home game, Walker managed to best the Walton goalkeeper. It was 2-1.

Clapton kept the pressure on, and in a moment of glory, Scriven heel flicked the ball over the head of a Walton defender, found Link in the middle, who slotted the ball just wide.

After this, it became apparent that Clapton couldn’t keep up with the young Walton Casuals’ fitness level.

Defender Annie Quartey went down injured further up the pitch, and the ball found its way past the remaining defenders.

With 80 minutes on the clock, the Casuals struck again. 3-1.

Once again Walton Casuals came out on top, showing just why they are undefeated in the league.

The game was however not lacking in hard work and passion from the Tons, and they go again this coming Sunday, when they travel to Clapham to take on Comets.

Photos by Annabel Staff and Nick Davidson over on Flickr.

Hard to narrow it down to just four options, and a close run vote, but Quartey gets the nod.