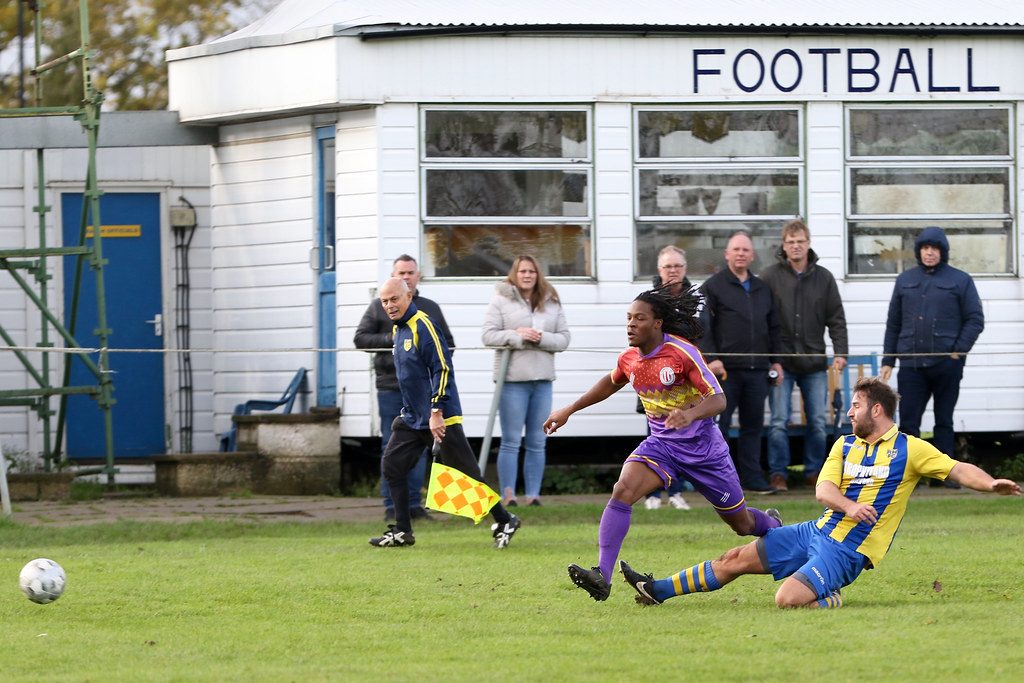 The Clapton CFC men’s team slipped out of the BBC Essex Premier Cup in disappointing circumstances in a re-played game in stormy conditions.

Having won the second round tie 2-1 a couple of weeks back, the Essex County FA ordered the game to be played again due to roll-on-roll-off subs wrongly being used.

Player-manager Geoff Ocran chose a much-changed line-up, perhaps with one eye on the NW London home game on Bonfire Night.

Defender Ashley Headley was given the goalkeeper gloves; defender Michael Graham made his CCFC debut; and winger Jon Akaly made his first appearance of the season.

However, there seemed enough of a sprinkling of star names to finish the job once and for all.

An early chance for the Tons saw player-coach Sham Darr, who had an impressive game, shape to blast home from the edge of the box… only for a huge divot to leave him kicking air instead.

And things didn’t get any better when Akaly – making his return from long injury – fell to the floor clutching the same leg. He was subbed off for Bogdan Panescu with just 15 minutes on the clock.

Paul Oshin was dominating the early midfield battle and in one instance showed brilliant strength to hold off three players and send them the wrong way with a delicious drag back.

In truth, the Tons looked a class above their lower division opposition in the first game – but things weren’t looking so straightforward this time round.

The Runwell Sports frontline in particular was vastly improved, and there was a let-off when a dangerous cross bobbled between Nick Loblack and Headley but just about stayed out.

Soon though the crowd’s attention strayed to non-playing matters, as a home fan ran a circuit around the pitch dressed in boxing gloves, boxer shorts and very little else.

The match soon took a more serious turn though with a red card for each side. Young CCFC winger Noah Adejokun was tripped and responded with some pushing and shoving. One for the stattos – it was CCFC’s first ever straight red card.

In the final move of the half, Panescu almost grabbed a much-needed goal but guided the ball agonisingly on to the bar and out.

A tight first half, then, but at 10 vs 10 the second period had the potential to be much more open. And so it proved with Runwell grabbing the opener within the first minute, youngster Caden Vine finishing off a move down the left.

Within five minutes, the Tons were back level from the penalty spot. Josh Adejokun was upended as he surged towards goal and Cemal Agdelen scored the spot-kick with a cool finish – his first goal for the Tons.

The winning goal was a very soft one from CCFC’s point of view. A free-kick thrown into the box found the tall Charlie Burns unmarked at the front post, who made no mistake.

Ten minutes or so left and the Tons stepped up a gear. Full-back Fama Sangare – who scored in the first game – had a strong long range shot held after a great play from Oshin and Panescu.

Then Panescu had a shot turned round the post. Dean Bouho headed fellow sub Marlinho‘s cross inches over. And with almost the final touch, Marlinho himself hammered in a shot that the keeper batted away.

So, for the second season in a row, the Tons limped out of the BBC Essex Premier Cup at the first hurdle.

However, Ocran will perhaps not lose too much sleep over this disjointed performance from his makeshift side if they manage to beat NW London in midweek.