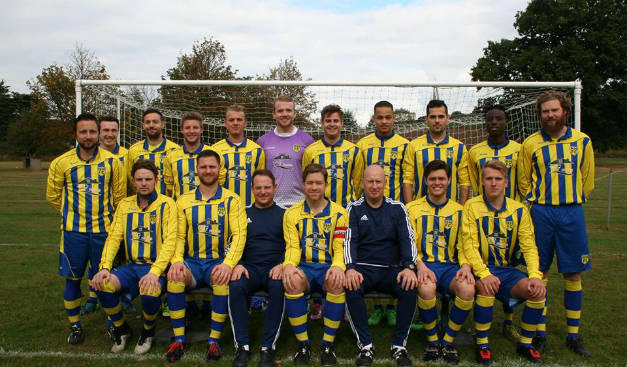 It’s Runwell vs Well Run as Clapton CFC head to rural Essex as our men’s team bid for more silverware.

The tie is in the second round of the BBC Essex Premier Cup. the only cup where Geoff Ocran’s men didn’t reach the final last season, instead being knocked out at the very first attempt in a nine-goal thriller at home to Hutton FC.

Runwell Sports play in the Essex Olympian League Division One, which is one level below our own Middlesex County Football League Premier Division.

Our hosts have been a yo-yo team recently, being relegated two years ago but bouncing back at the first attempt last season, after finishing third.

It’s fair to say they started the new season poorly, losing their first three league games and a cup tie, but have since perked up..

Perhaps their nightmare run of injuries and unavailability, including having three keepers out at the same time, is clearing up just in time for our visit.

The football team is the oldest part of a multi-sport club established over 70 years to provide recreational facilities to the staff of the neighbouring Runwell Hospital.

Runwell Hospital Football Club was formed in 1946 but changed its name in 2016 after the demise of the old hospital, which is now a housing estate.

The club run a huge number of football teams, from under 6s up to adults, both girls and boys and men and women.

On their 17 acres of playing fields they have three full-size football pitches, a rugby union pitch, and space for archery and model aircraft flying.

Entrance is free! There will be a fully licensed bar available from 10am, which also sells hot food.

There will be a result on the day. If level at full-time, it will be extra-time then penalties.

The closest train station to Runwell Sports is Wickford railway station, about 30 minutes’ walk away, which pass the two village pubs, the Quart pot and a Toby Carvery.

However, on Saturday there are rail replacement buses running part of the journey, from Shenfield onwards.

Kick-off is at 2pm so return departure likely at around 5pm, unless extra-time and penalties happen.

We’ll email the exact pick-up point on Friday, but it will be in the Stratford area.