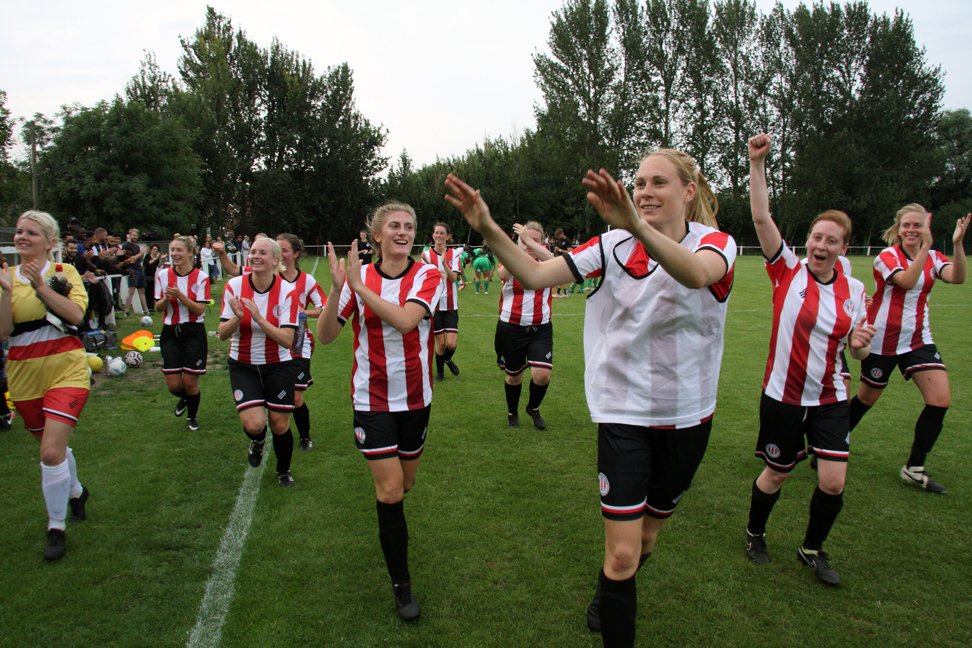 Centre-back Alice Nutman gives her take on a historic match:

After months of talks and plans, CCFC women’s team were about to make their debut in red and white stripes.

The sun was shining and the Stray Dog looked as inviting as ever for us to play out from the back. We put on our shirts for the first time and with them the weight of anticipation.

Patrick McLaughlin, newly appointed manager named the starting 11 and we took to the pitch for a much needed warm up.

The Tons started quickly, popping the ball around the Santacruzense midfield before an assist on her debut from Ana Holmes was expertly slotted away by Emily Link within the first few minutes of the game. Nerves were settled, cobwebs cleared, now the game really began.

Link doesn’t stay quiet for long and a long range shot sailed through the keeper’s outstretched hands to make it two.

Santacruzense woke up, through a combination of Link’s almost indecent finishing ability and the sound of the drums and chanting from the supporters. A quick through ball was latched onto and slotted away. 2-1.

Not ones to panic, we continued to pass it out from the back, with Harriet Plows and Hannah Wright bombing forward from full back positions and delivering some lovely balls into the box. Eventually a perfect ball from Plows landed on the head of Link and was neatly headed into the top corner. Link with a hattrick in the first half – she’ll be unbearable at the pub.

The second half saw a lot of changes giving the new gaffer a chance to see our strength in depth.

Substitute Riddi snatched at a long range opportunity on her debut to make it 4-1.

Ciara Monaghan and Holmes continued to control the midfield. Popping off passes and drifting past players with ease.

Santacruzense weren’t finished yet though. Another through ball from the back saw them close the gap. 4-2.

Last ten minutes of the game and time for a final hurrah from the Tons.

Link had been moved out to the left, but can’t be kept away from the goal.

A side-footed slot into the net. The 5-2 scoreline sealed. Her dad Vite had travelled from Birmingham for her debut now got to hear her name being sung from the stand.

An excellent day at the office for all involved.

A momentous day for CCFC and women’s football. The start of a beautiful journey.

With Link up top – next stop Wembley.