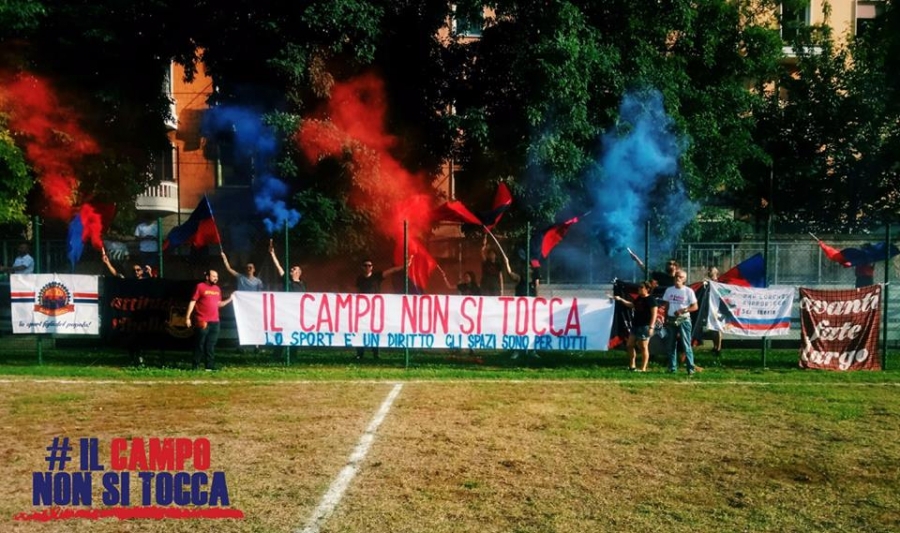 A profit-driven individual taking over a community facility for their own financial gain – sound familiar?

This time it’s the Benedetto XV sports centre, which was originally built to serve its community, but their access has been taken away by a greedy owner.

We at Clapton CFC are proud to support our friends at Atletico San Lorenzo in their campaign to reclaim the sports centre for popular use.

What is happening in San Lorenzo?

Atletico San Lorenzo is a working class sports club located in the city of Rome. It’s a 100% non-profit organisation, run and financed by, and for, its members and the surrounding community.

The local sports centre, Benedetto XV, is now being managed by the foundation of the Knights of Columbus, who are attempting to begin the process of transforming the historic football field into a number of 5-a-side football fields.

This will surely bring a lot more money to the foundation, but at the cost of the neighbourhood’s 11-a-side pitch, which is used by the entire Atletico San Lorenzo youth sector, as well as other local teams.

However, the majority of our teams will be/are forced train and play outside the walls of the neighbourhood, because the other facilities in San Lorenzo are either unapproved for official championship games or because they are run for profit by private firms.

Until recently, there was a plaque hanging over the entrance of the centre stating: “EVERYONE IS ACCEPTED, EVERYTHING IS FREE”

However, since the management of the centre changed to a profit-driven organisation, the plaque has been removed and with it the community focus of the centre, which had stood for many, many years.

Sadly, these changes to the sports centre are only one part of process of decreasing public spaces that is making our neighbourhood less accessible and community focussed.

The neighbourhood of San Lorenzo has been negatively affected by private investment projects under the guise of community development too many times.

WHAT DO WE WANT?

We want a neighbourhood and a city where the welfare of its people is put before greed and profit, where green spaces for sport and social activities are available and accessible for all residents.

We want the chance to have all our teams, starting from the juveniles, train and play in facilities within the neighbourhood of San Lorenzo, continuing to guarantee the right to free sport for everyone.

We want the decisions that are being made about the free use of the sport centre Benedetto XV to be public and transparent.

Above all, we want to ensure that EVERYONE IS ACCEPTED & EVERYTHING IS FREE, as it has always been.

Please sign our petition to help us achieve our goal! bit.ly/2NssRtA