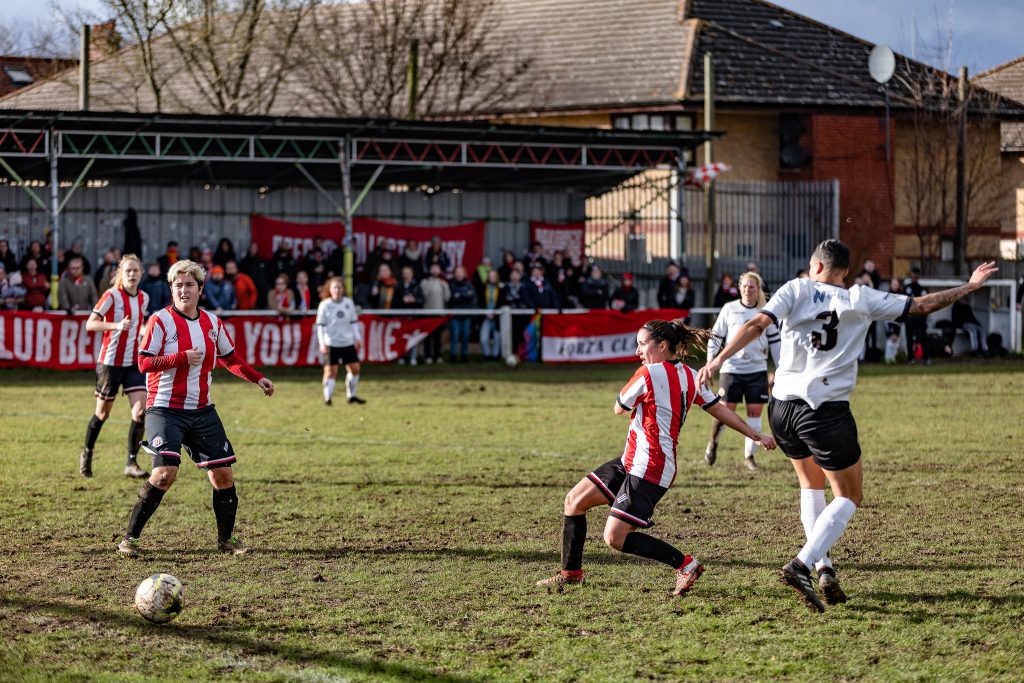 These two previously unbeaten teams put on a superb show in tricky conditions in front of the biggest league crowd for the women’s first team to date.

The pitch was switched an hour before kick off due to standing water on the Wadham Lodge Stadium pitch caused by an overnight deluge.

A real shame, given this was due to be their debut in the stadium, but all was not lost as the Stray Dog pitch next door was deemed to be firmer.

After some last-minute work from the ground staff, both sides and the ref were happy to play despite the mud. Game on!

Our visitors Bromley looked a formidable challenge, level with us in the table, and in fact unbeaten in two years having risen up the levels.

But despite not having played for weeks – and no league game for a whopping 91 days – it was a perfect start for the Tons with a goal within the first minute.

Somehow, within seconds of Bromley’s own kick-off, the ball was fed through to Marta Casanovas in the box, who cut inside and fired past the keeper.

If that shocked our visitors, it certainly didn’t affect their play as they looked a formidable outfit. They quickly got to grips with the difficult playing surface and enjoyed huge spells of possession.

Clear-cut chances, however, were at a premium, though. Their stand-out moment came on 25 minutes when a shot finally beat Polly Adams but was only rolling towards goal. Captain Alice Nutman chased back, slid in and somehow scooped it off the line and away in one perfect manoeuvre.

A precious 1-0 lead at half-time, and afterwards Bromley continued dominating the possession but with CCFC holding firm and hitting them on the break, Maria Mendonca‘s lung-busting runs in particular causing trouble.

Most of the crowd would have expected that pattern of play to continue, but Emily Link had other ideas with two stunning quickfire goals.

Firstly on 55 minutes, a superb Lucy Spours through ball (not the first time we’ve written that sentence) and Link drove forwards into the box and then slotted under the advancing keeper.

Within a minute, another ball through, and another Link counter-attack and tidy finish for her 22nd goal of a phenomenal season.

That was the end of the scoring, although Bromley continued to press and hit the crossbar in the final minute.

But the three points were deservedly ours from a faultless display from front to back. And it was a big three points in the promotion race, putting us clear of Bromley, although with plenty of football left to play.

Both teams will now be looking to reel in leaders Islington Borough, who are five points clear.