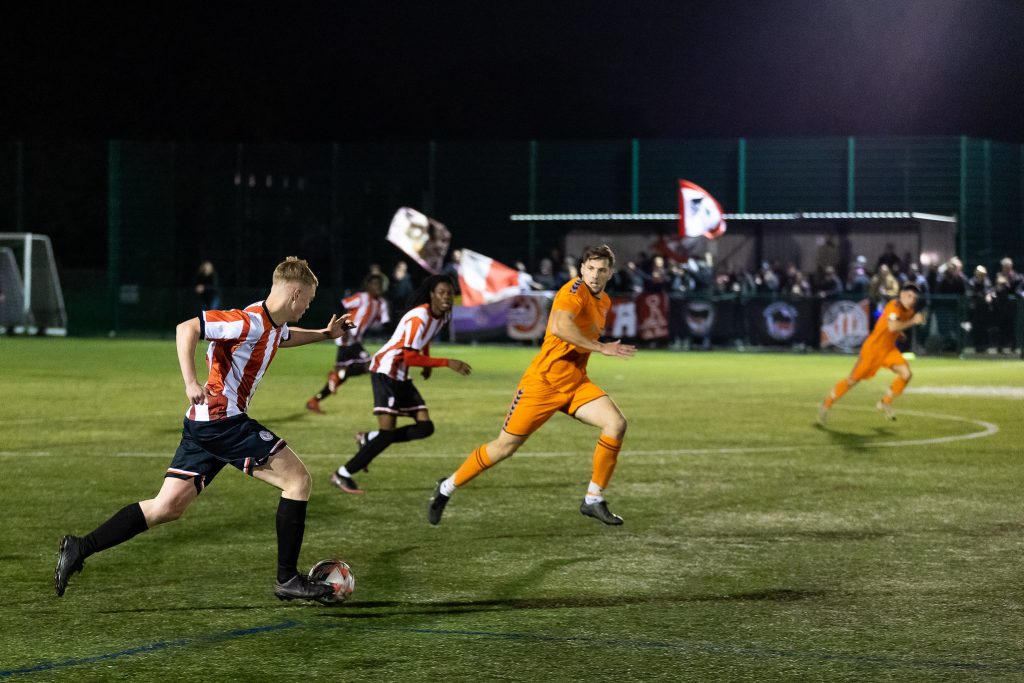 Clapton CFC men’s first team came from behind to win a thrilling cup tie but needed extra time to see off Leigh Town.

Player-manager Geoff Ocran made some changes to his squad, including a recall for promotion-winning goalkeeper Dan Anfossy, who is now our cup specialist.

Meanwhile on the bench there were welcome returns from injury for Tafari Nicholas and Noah Adejokun.

The Tons’ preparations for the unusual 5.15pm kick off were not helped with a players’ car breakdown and general slow traffic.

That meant midfielder Ocran himself started at centre-back until the arrival of Dean Bouho.

Despite playing a level below, the home side were on top from the start and scored within 10 minutes, a shot from the home side’s Brodie Horne flashing across the goal and evading Anfossy’s dive.

CCFC went straight up the other end and equalised, with James Briggs slotting a penalty high into the net after Fred Taylor was tripped in the area.

But just as quickly Leigh went ahead again, with their top scorer Horne bagging his twelfth goal of the season in just nine games.

On the 21st minute, it was all square again at 2-2, after a lovely ball from Jake Stevens set up Taylor to score.

After that early flurry of goals, there were no further goals until the 63rd minute, when sub Arthur Wright hit a 20 yard cross/shot into the top corner from a seemingly impossible angle.

That looked to have sealed it, only for Leigh Town to equalise in the last minute, with the ref and lino debating whether Lewis Lawrence’s goal was offside.

That meant extra time, but the Tons ensured no penalties were needed with goals from Prince Kwakye and a second for Wright. Just before 8pm, the marathon match was finally over.

We should end with praise for our talented and welcoming hosts, who switched this game to a more suitable venue for spectators at their own expense.

If our meeting in the next round of the BBC Essex Premier Cup with their town rivals Leigh Ramblers is as exciting, we’ll be in for a treat.