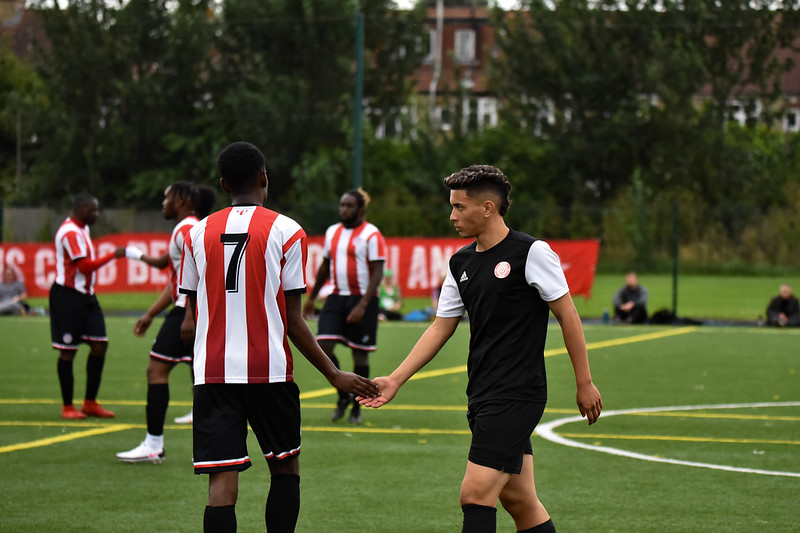 Estudiantes hailed this game as their best ever result, as they held a Clapton CFC men’s first team XI to a draw in an enjoyable friendly.

Clapton CFC fielded trialists and plenty of squad players, but still should have had enough to see off the young visitors, particularly having beaten them 3-1 in an away friendly in December.

There were returns for left-back Alby Miller and midfielder Louis Rene – their first games in almost a year – and both were heavily involved in the game.

However, the visitors, who are students from Haringey College, were largely comfortable in a goalless first half.

The first real chance fell to Estudiantes on 15 minutes, a right-wing cross finding their striker unmarked, but his first time shot from 10 years out flashed over the bar.

The Tons went close with Rene hitting a shot over the bar, our trialist striker bustling into the box and firing into the side netting. Then Troy Cleghorn, stepping up from the development team, hit one wide from distance,

We weren’t having it all our own way, and an Estudiantes shot from the edge of the penalty area was heading for the bottom corner, but keeper Jack Francis somehow saw the ball through the crowded box and pushed it wide.

The introduction of striker Aaron Yfeko from the bench in the second half had an immediate impact, leading the line well. And it was he who set up the opening goal, capitalising on a slip by a defender to set up Cleghorn to blast into the corner.

Within minutes, CCFC could have wrapped it up. Musa Manneh on the break guided a shot wide, while Yfeko’s shot was saved.

But just as the Tons looked comfortable and ready to kick on, Estudiantes levelled up after a defensive mistake.

Our trialist defender trying to playing out of the back misplaced a pass, which was pounced on by Estudiantes’ Mohsin Mohamed.ro score.

The Tons spurned another hatful of chances, courtesy of Rene, and Yfeko and Manneh, while sub Arthur Wright also could have won it when played clean through, but his one-on-one shot was saved by the keeper by his legs.

But the visitors – who had an average age of 18.9 years – were not without moments themselves and deserved their draw.