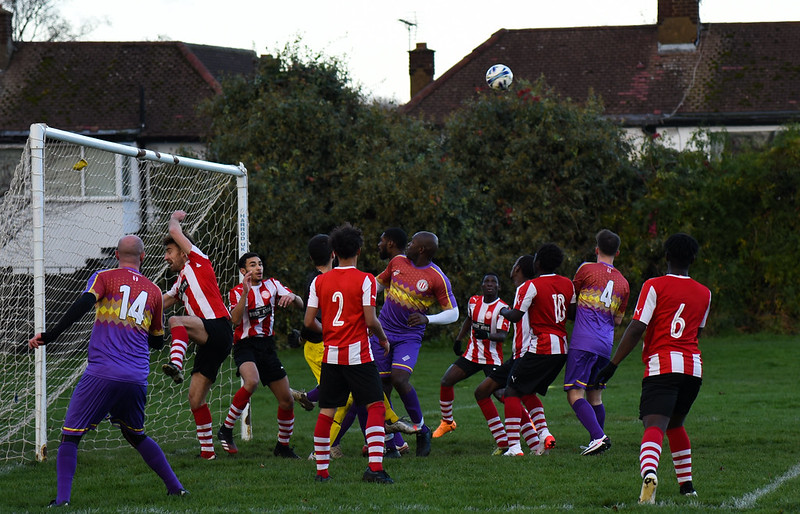 The men’s first team returned to action after lockdown 2 with a hard-fought friendly win in the freezing cold.

With our scheduled league game called off by opponents Kensington Dragons, a low-key practice match was arranged in its place.

The London branch is a team of talented young players from Haringey in full-time education, coached by UEFA qualified coaches.

They usually play against college sides but have also faced two of our league rivals in friendlies, drawing 0-0 with NW London and losing 2-0 to Cricklewood Wanderers.

CCFC player-manager Geoff Ocran mixed up his pack, giving starts to Samba Badjana and Charlie Fagan in midfield, Bogdan Panescu at left-back and a trialist up front.

Both teams tried to play as much football as they could on the long grass of a lumpy, sloping North London park pitch.

The Tons got their noses in front through the trialist, who drilled a fierce snap shot into the corner midway through the half.

In the second half, Panescu scored after being pushed further forward, and Josh Adejokun seal the wun.

But Estudiantes – playing in red and white stripes – created plenty of chances in both halves too. Some were squandered, others kept out by Tons keeper Jack Francis,

At one point, the young side should have drawn level at 2-2, when they were awarded a penalty.

The strike rebounded off the bar and the follow-up was knocked in – only for it to be disallowed as the same player touched it twice.

Overall, Ocran can be pleased of the workout against an energetic young side, setting themselves up for a cup clash with Hullbridge Sporrs U23 on Saturday.