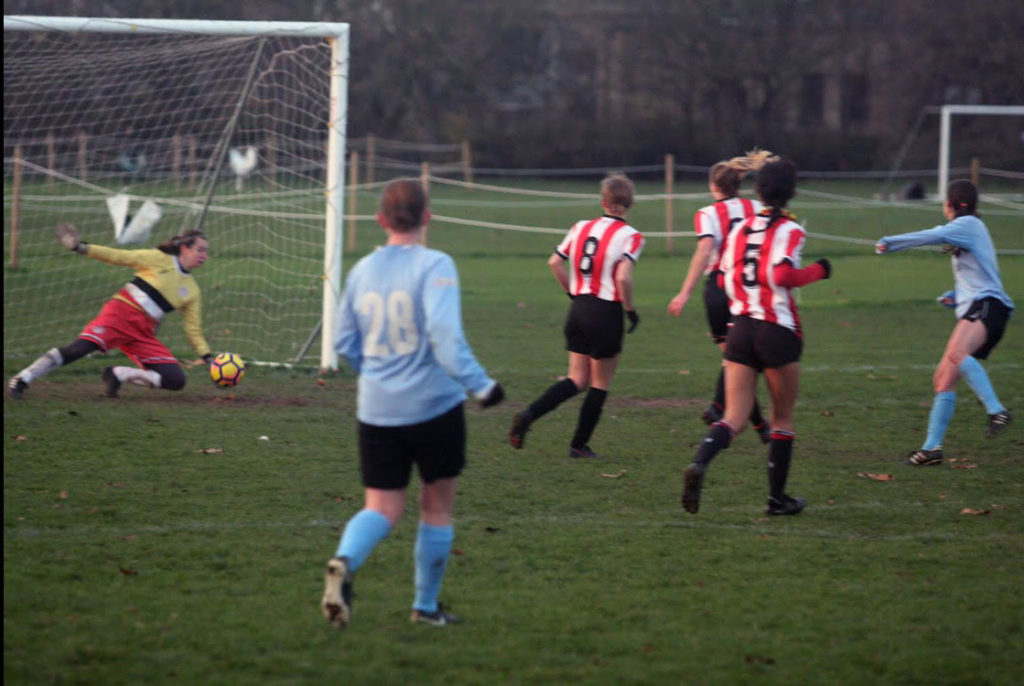 CCFC’s women’s first team have played in plenty of parks before. For example against Regents Park Rangers, who confusingly play in South London. But their return to post-lockdown action against Comets in actual Regent’s Park on Sunday was their first game in a royal park.

The difference became clear before kick-off when a real-life Regent’s Park Ranger told our fans they couldn’t have flags or drums. This comes from some horseshit regal rule, no doubt to prevent an uprising of the peasants. Or just because they think they are better than our salt-of-the-earth council-run parks.

The home team were not very accommodating either, taking the lead before the Tons had a chance to settle. The Comets right winger fired in an inch perfect cross for a striker to head in from close range.

Clapton looked to respond right away. Emily Link made a surging run down the wing. In a near mirror image of the opening goal, the ball was whipped over the keepers head. But the onrushing Maria Mendonca was unable to get there on time.

The Tons struggled to find their rhythm. A hard-working Comets side were managing to stifle the visitors’ attacking threat, while looking dangerous on the counter as well.

On a couple of occasions Tons keeper Polly Adams hurled herself into the path of danger to prevent a near-inevitable Comet strike, much in the same way as Bruce Willis in the 1998 film Armageddon.

Then coach Claudio Gomes sent Ciara Monahan into the fray in place of Li Steiner. The midfielder had a couple of long distance efforts. Finding her range.

Excitement levels rose as a gorgeous caramel-coloured dog ran onto the pitch while Comets were on the attack. Well-behaved too, as it immediately obeyed the referee’s gesturing for it to leave the field of play.

Clapton took the ball straight up the field, with some lovely interplay between Link and Larissa Vieira. Monahan received a tee up on the edge of the box and fired it over the keeper. Range found. 1-1.

With the opposition languishing at the foot of the table, Clapton would have been confident they could turn it around in the second half. But Comets continued to defend resolutely. Credit also to their coach, who was matching the Clapton support for passion and volume, all by herself.

And on 58 minutes, she had something to really shout about when one of her forwards curled an excellent shot beyond Adams to put her side back in the lead.

Harriet Plows and Ciara Robinson then came on to offer the visitors fresh energy. As the clock ticked down without many further chances, Clapton turned their thoughts to just salvaging a point.

In a frantic closing spell, there were calls for a Tons penalty for handball. The referee wasn’t interested. Vieira managed to prod the ball past the Comets goalkeeper from a tight angle, but couldn’t steer it in.

Then right at the death, Comets had an excellent chance to add a third. With Clapton’s outfield players committed up the park, again it was only Adams in their way. Again the keeper made a top stop. But the Tons were out of time.