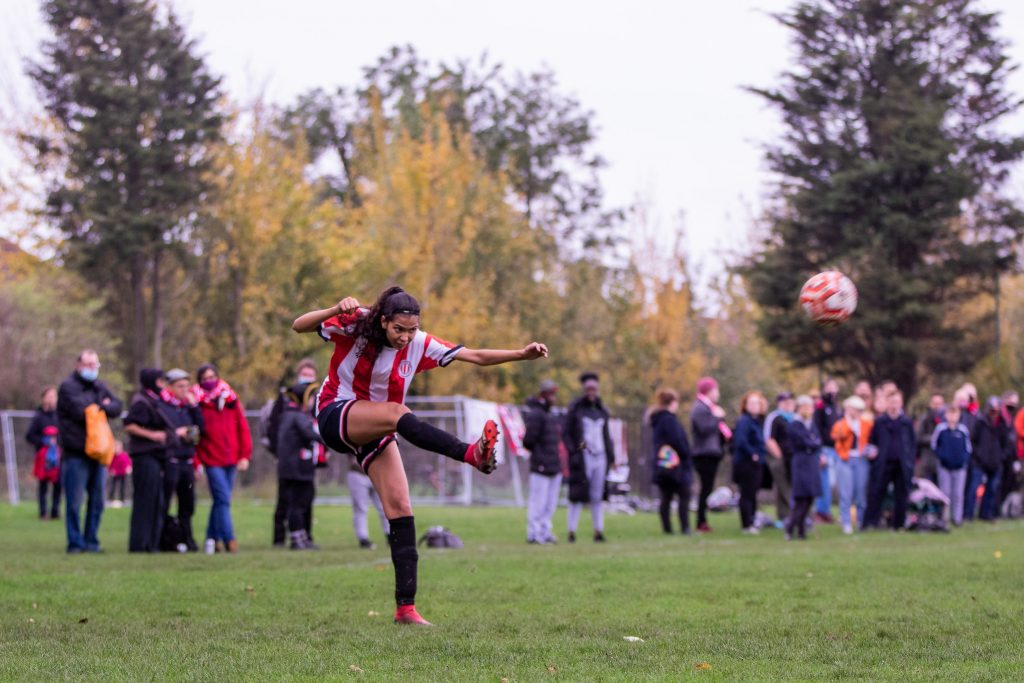 After recent downpours, our usual home of the Stray Dog was unplayable – but with the prospect of no football for a month or more, a makeshift solution was found.

The third grass pitch at the back of Wadham Lodge was found to be in good condition, No cover, but forecast favourable. Game on! All of 50 metres away.

Thanks to the monumental efforts of club volunteers, the LRT Sports Ground (or the Lost Dog as one fan suggested) was dressed up and ready to roll for one game only.

The hosts were on top from the start. On five minutes Tons midfielder Marta Boiro forced the ball over the line in a scramble.

But the referee adjudged her to have kicked it out of the goalkeeper’s hands and chalked it off.

On 29 minutes Emily Link raced onto a through ball down the left. She cut inside and squared for Boiro to sweep home.

Clapton had another goal disallowed, this time on a narrow offside call, as they continued to dominate.

But just before the break Islington equalised, from pretty much their first attack. A whipped corner from the left was nodded in at the near post.

Ten minutes into the second half, the Tons went ahead once more. Larissa Vieira skipped past two players on the edge of the box.

She then caught the keeper out with a pinpoint outside-of-the-boot shot that found the inside of the post.

Clapton’s third was made by Vieira marauding down the right. She beat her marker to the bye line and whipped the ball across the face of goal. An Islington defender could only turn into her own net.

Both teams came close to adding to their tallies in the closing stages. Substitute Ciara Monahan pinged a free kick off the bar and Borough hit the post on a break.

Just before the final whistle, the visitors were shown a red card for dissent.

Such a dominant performance against a team who inflicted two defeats on them last season is a mark of just how how much this Clapton team have improved.

The win cements their position in second place in the GLWFL Premier, in the last game before play is expected to be paused for at least four weeks.