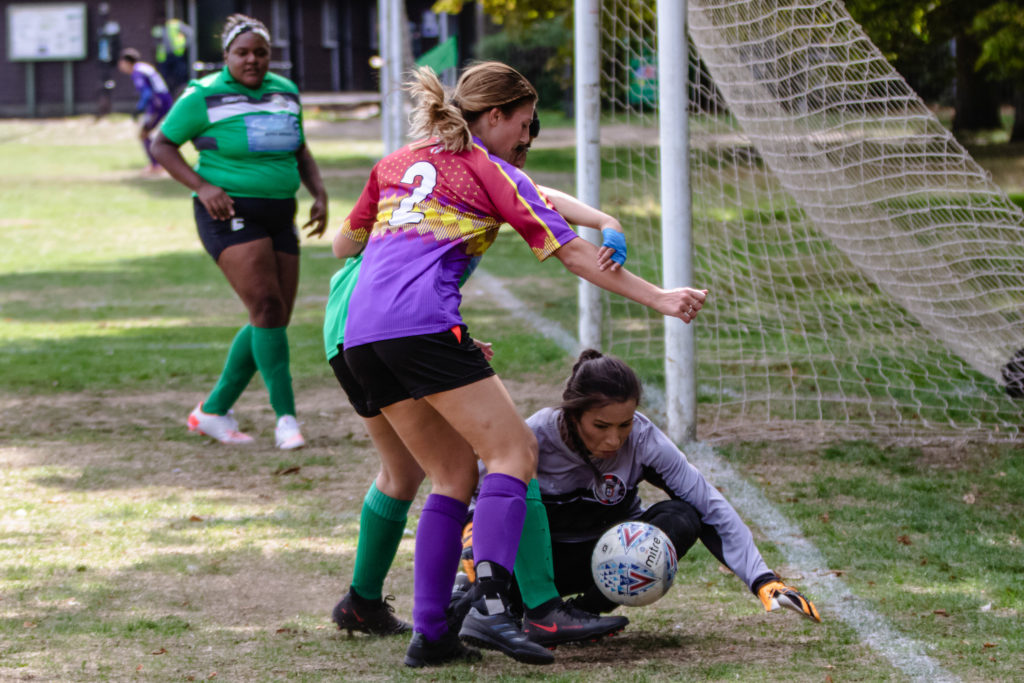 Another historic milestone in the progressive story of Clapton CFC saw the Tons extend our growing community with the first competitive match of Clapton CFC Development team.

Our opponents on Clapham Common in the Clapham Women’s Football League were Santacruzense, who appropriately were the first club that the women’s first team played after adopting the red and white stripes, back in August last year.

The Clapton team comprised a mixture of players known to us from last season and recent friendlies plus some new recruits.

Santacruzense also featured a player familiar to Tons’ fans after her recent impressive performances for CCFC.

Unfortunately the final result did not reflect the expectation and effort that Clapton invested into the 90 minutes.

Santacruzense’ exuberant celebrations at the final whistle emphasised how unfortunate CCFC were not to take any points away from South London.

The Tons got off to a slow start allowing Santacruzense to take advantage of defensive miscommunication to score within the first five minutes.

However, Clapton warmed to the task and held firm at the back while building attacks from midfield and letting our speedy wingers run riot.

The hard dusty surface was an added challenge to the passing game that the Tons played, forcing a succession of corners and goal-mouth scrambles.

Both defences held firm until just before the break when a Santacruzense corner found its way into the net to give them a 2-0 lead at half-time.

The second half saw CCFC take a gradual hold on the game and got back into the game when Yem scored with a shot from the edge of the penalty-box.

With ten minutes to go the equaliser came from assistant coach Zhane Amoaten, after a run down the right flank from Harriet Plows the pass was collected by Zhane who dispatched past the stranded keeper.

The Tons continued to press forward looking for all three points and with pace and skill from the front runners it certainly looked on.

However, Clapton were undone by a long ball over the top which resulted in a challenge that left defender and attacker on the ground and the ref pointing to the spot. Santacruzense converted leaving Clapton no time to respond.

Disappointment was tempered by a good performance with issues that can be addressed and resolved, particularly the need to start the game at 100% and put opponents under pressure straight from kick-off.

Zhane led by example with her performance on the pitch and as part of the coaching set up with Brian Bramble and Claudio Gomes offering support this team has more historic milestones ahead of them.

Management picked Flora Cantacuzino Levy for player of the game.