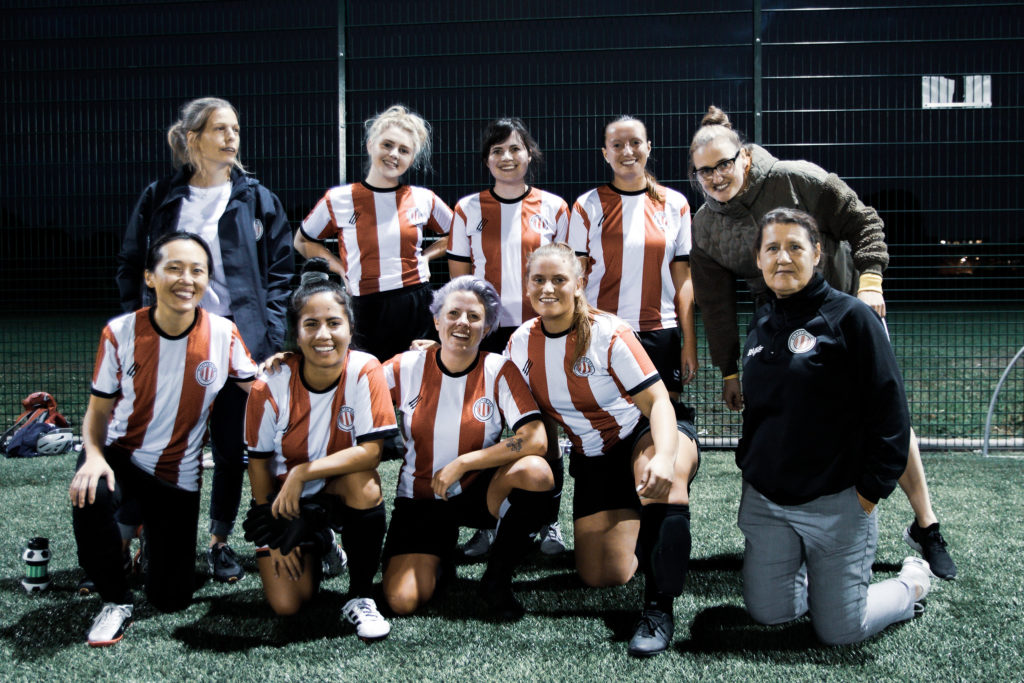 Clapton CFC 5s team are Flexi League Champions in The Super5League in our first season in the competition.

Few would have predicted this outcome after supporting the team in the first two friendlies against Sporting Club de Mundial back in the dark evenings of the winter of 2019. Tons lost both games with an aggregate score of 3-16.

But the fantastic coaching team of Ellie Guedalla, Julie Leaff and Brian Bramble instilled discipline and technique into a team of players, many new to the game or long-lapsed, but always with a sense that the game was to be enjoyed.

Brian was unable to attend tonight’s game due to his commitments with Clapton’s other teams but he was there for the warm up and to impart words of encouragement.

Julie and Ellie then gave the team a session of shooting practice intended to iron out the main problem from last week’s draw with Todo Ciudad. It was to prove prescient.

The game began with Tons four points clear of three chasing teams, so only needed one one win from the remaining two games to clinch the League Title.

Islington Reds was one of those teams with a chance to overhaul them. This was a must win game for both teams.

Clapton was high on the press straight from kick-off, and within seconds had hit the post and then shot the rebound just wide. Islington came back and Lucy Rankin in goal saved a succession of on-target shots.

Chelsie Sparks, who has kept goal so well throughout the season, was unavailable through injury cheered from the side-line.

After ten minutes CCFC took the lead with a great strike from Sinead, Islington came back on the attack but Tons’ defence held firm with the goalkeeping duties being rotated, with Maylea Ma taking her turn to guard the net.

The rest of the half belonged to Annabel Staff; blocked in by two defenders Annabel audaciously back heeled a pass to Sinead who hit a stunning shot into the back of the net to complete her brace.

Bels was not finished, when attacking with Rhianne and closed down by Reds defenders she thumped the ball into the top corner to put the Tons 3-0 up at the break.

Clearly that pre-match shooting practice was repaying the effort with interest.

The second half saw Clapton adopt a pragmatic approach to managing the game by sitting deep and putting players behind the ball, repulsing Reds’ attacking forays and preserving energies.

As Islington pressed forward to try to get back into the game they left themselves open to the counter and Lucy, now playing outfield took advantage, running through the Reds’ defence , graduating from the shooting school with honours to make it 4-0.

Rhianne made the same break shortly afterwards, dribbling through challenges and maintaining composure to shoot the Tons into an unassailable 5-0 lead.

Islington hit back with two very late goals, the first very well taken from wide on the right but it was too late.

Celebrations will continue with the final game next week against Goaldiggers, a shame that matches are still being played behind closed doors, but there will be opportunities soon for the Clapton family to congratulate the latest winning Tons team.