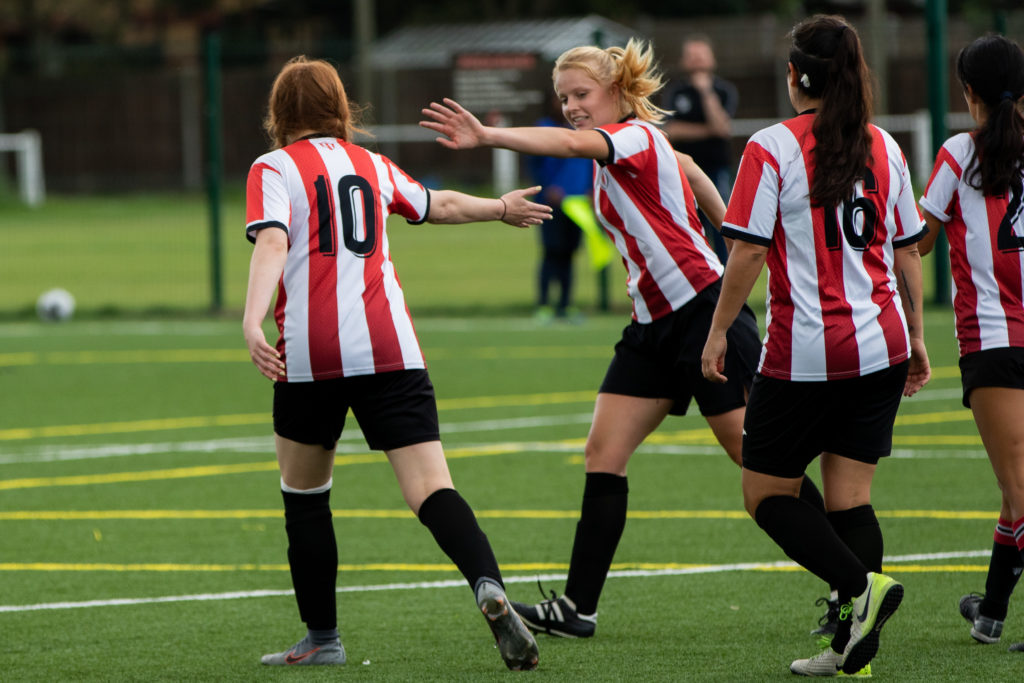 Another game with 22 players on the Clapton roster. Another year where Clapton CFC went up against Tower Hamlets for their second pre-season friendly. Another goal fest.

Clapton took the lead early on after Lenny Holmes got the ball onto Bethia Green’s feet, and she smashed it in behind the Tower Hamlets’ keeper.

CCFC continued to pile on the pressure during the first half, but it wasn’t until after the first drinks break that we saw more goals. This time, a trialist again found the feet of Bethia who scored her second goal of the day.

Tower Hamlets responded quickly though, and after some miscommunication between the Clapton back four, managed to get the ball in between Polly Adams’ goalposts. 2-1.

It didn’t take long for the Tons to get back on track though. After a free kick was awarded just outside the opposition penalty area, Saskia Walker sent the ball flying towards the far top corner. The Tower Hamlets ‘keeper made a great initial save, but couldn’t keep hold of the ball. Bethia Green was quick on the rebound and tapped it in, securing her hat-trick.

The Tons started the second half with 11 fresh pairs of legs, and it was clear from the moment the referee blew the whistle that this was a huge advantage. The second half team slowly grew into the game. And then the goals came, one after the other.

4-1 – Marta Boiro headed the ball in from a great cross by the trialist on the right wing.

5-1 – One of the six trialists Clapton had with them on the day carried the ball forward from her right-back position and fired away a 30 yard shot which sailed over the head of the goalkeeper. As noticed on the live stream, this was an early contender for the Puskas award.

6-1 – Another Tons trialist was on the receiving end of a fantastic through-ball served by Lucy Spours and slotted in with her left foot.

7-1 – Clapton’s 7th of the day was a great team goal which started when goalkeeper Sophia Axelsson received the ball from the midfield and passed it to Phoebe Parthews. The centre back pushed forward and found the feet of the trialist on the left wing. Emily Link made a run for it and received the ball in a perfect position to slot between the posts.

8-1 – Marta was once again in a perfect position to receive a cross ball, this time from a corner. She easily tapped in her second of the day.

10-1 – The tenth Tons goal of the day was the result of an unfortunate deflection from a Tower Hamlets player.

11-1 – And the final was scored by the trialist on the right wing.

11 goals, 8 different goal scorers. It was a good day at the office. On Sunday the Women’s First Team will go up against Hackney WFC from the league above. Let’s hope the confidence gained from this goal fest can see the team compete well against this tougher competition.

Or you can watch the goals on the video below.