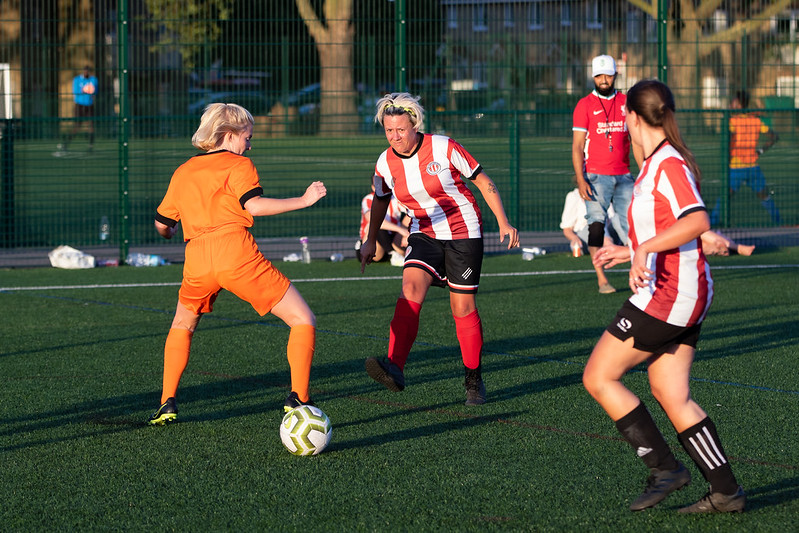 Clapton took control of the game from the start with a combination of strong running from Wright and Staff up front supported by a solid back line marshalled by Chelsie Sparks in goal and Allana Scable sweeping and instigating attacks.

The ball was played to feet, players looked for space but were not averse to running with the ball and attacking the Parrots goal directly.

The post was whacked a couple of times and shots fizzed just wide, but the Hackney defence stood firm and could not be knocked off their perch.

The breakthrough came just before half-time when Lauren Ryan came off the bench to reprise the last performance in the 11-aside game against Goaldiggers back in March.

Again Clapton looked to play the ball intelligently, Annabel called for a pass on the right wing but the ball was cut out by a Parrots defender, the loose ball was contested and fell to Lauren who struck an unstoppable shot to put the Tons deservedly 1-0 up at the break, elbows were bumped in celebration.

The second half picked up for CCFC where the first had ended, now with the sun behind them and not as a blinding light, further attacks produced more direct hits on the posts.But then in a furious ten minute spell the game turned decisively to the Tons.

First Allana, after breaking down a Parrot’s attack played the ball through midfield to Rhianna who held the ball up against strong Hackney challenges whilst Allana stormed down the pitch demanding the return, receiving the ball, back to goal,

Allana chipped over the shoulder tobeat the goalkeeper with an audaciously taken goal.

Rhianna had been dominating the Parrots defence with strong running all game and was rewarded when a surging attack down the left wing ended in a shot that beat the keeper and hit the top corner of the net.

Sinead Gunning, who is another graduate from the 11-a-side development team, came on and caused more mayhem in the Parrots defence with strong direct running at goal, the first couple of shots were markers to aid the decisive strike that made it 4-0 to the Tons.

Lucy Rankin also came off the bench to add more punch to the Red and White waves that swept towards the Parrots goal, but Hackney’s defence held firm.

With the game as good as won it did not seem too concerning when Chelsie conceded a penalty.

However in another throwback to the last game against Goaldiggers, Chelsie dived to her right and got a strong hand to the well struck penalty to maintain a clean sheet for Clapton.

A great return to football for the 5s, and congratulations to The Super5 League for a well-organised match day with compulsory temperature testing for all players and staff and plenty of sanitiser available.