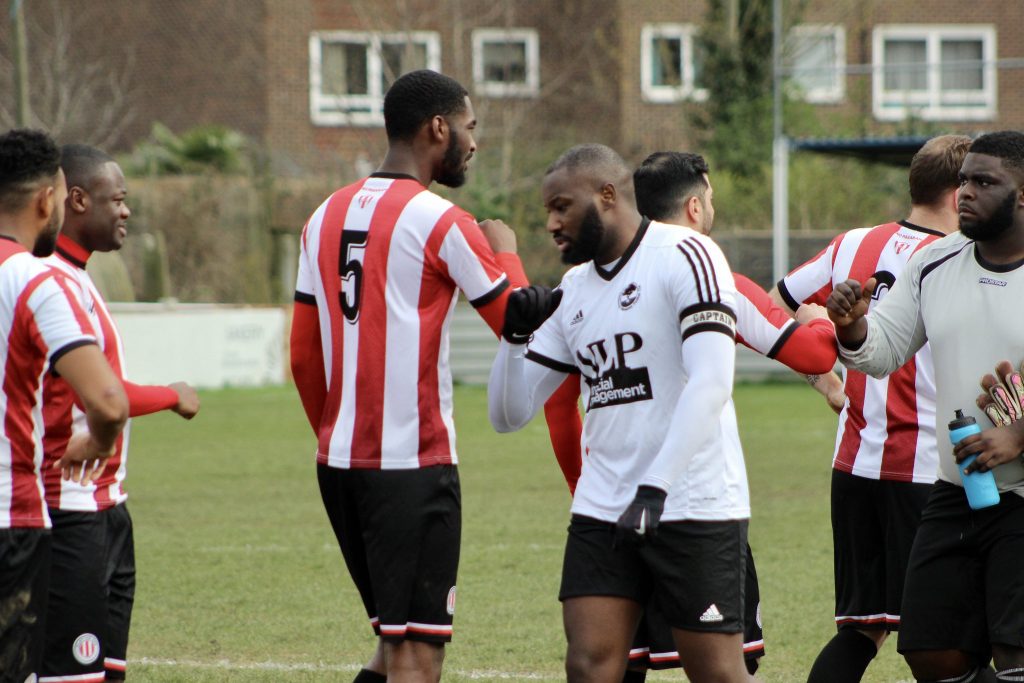 The only game in the MCFL Premier Division saw fifth-placed Clapton CFC take on second-placed Cricklewood Wanderers at our temporary Walthamstow home.

Wadham Lodge was eerily quiet as the teams lined up last Saturday, for the last league fixture for the foreseeable future.

The teams greeted with an elbow touch rather than a handshake and the cheers of hundreds of Tons’ fans were replaced with birdsong and the chime of a distant ice cream van.

A skeleton crew of volunteers was in attendance so that the game could go ahead.

Though it was played behind closed doors, they had laid out Clapton banners for the match livestream, which at was viewed live by almost 250 fans during the game, and another 2000 since.

There were a few tweaks to the team that narrowly lost on penalties to London Samurai the week before. Though most often playing in midfield, ‘Utility’ Sham Darr replaced Sherwin Stanley up front.

Arshad Coowar had also been moved up the pitch, with the defender replacing Paul Oshin in central midfield.

The opening spells featured three Cricklewood corners, an indication of the pressure Tons were under early doors.

Another indicator was the birdsong being replaced by the roars of Jack Francis, capitalising on the novel ability of being heard by his defenders, and anyone else within a two-mile radius.

After a shot was blocked by Nick Loblack for a fourth Cricklewood corner inside 15 minutes, the Tons did look a little off the pace, the game’s first shot on target was smothered by Francis.

Then, the first decent Clapton chance, Liam Smyth whipping in a cross from the left that was inches from connecting with the head of Darr.

In the play that followed, Dean Bouho was launching throw-ins toward the Cricklewood box.

After a scramble to get possession, Julian Austin turned one defender, before a peach of a shot from the edge of the box.

Cricklewood’s keeper could do nothing but watch as the ball sailed into the top-left corner, bouncing in off the post. 1-0 Tons!

There is a question mark over whether it was a cross or a shot, but people give Ronaldinho a free pass for his 2002 effort, so it seems fair we extend that to Austin.

On the 20 minute mark, Smyth put Josh Adejokun through one on one with the keeper. The crowd – such as it was – held its collective breath, but Adjokun placed his shot wide to the right.

The near miss seemed to wake Cricklewood up slightly and following a few half chances at either end, they did manage to pull level at the half an hour mark.

Cricklewood’s hundredth corner was swung in by Idris Toure, then brought down to Kyron Mitchell at the left post, who pulled off a nifty back heel tp put the ball in the back of the Clapton net.

The rest of the half was slightly forgettable, two Wanderers free kicks went straight into the arms of Francis, a Clapton foul throw infuriated some online fans, Smyth broke out some break dancing moves.

Both teams seemed to be misusing their ability to actually talk to each other. Eventually, the referee went as far as proclaiming ‘the whinging is doing my head in’. Fair doos ref.

Another game, another Clapton penalty waved away. Sigh.

Austin raced onto a pass from Smyth, a Cricklewood defender swung for the ball but instead clipped onrushing Austin, who couldn’t continue through and strike.

The ref had a clear view but only shook his head, plus ca change.

Clapton pressed on in the second half, as did the levels of needle from both teams, Coowar got booked for a push on the near edge of the Clapton box, with Smyth subsequently picking one up for questioning the decision. The resulting free quick flew way wide.

Throughout the game, Noah Adejokun proved a handful with his runs down the wing.

Ten minutes into the second half he was brought down on the edge of the box for a free kick to be taken by Austin. The free kick was high but immediately dipped downwards.

However, this time it was not to be, the ball striking the top of the crossbar and bouncing out. Close.

As the game entered its later stages, it was the visitors from north west London who looked more likely to take full points.

Coowar made a fantastic last ditch block, Loblack made some excellent clearances, and it still required heroics from Clapton goalie Jack Francis to keep the scores tied.

First he saved a one-on-one chance, then tipped a dipping long range effort over the bar late on.

As Clapton held on for the draw, frustration crept into the team, with one or two players apologising to fans watching at home for a few swears.

The final whistle blew and the game ended with something of a fizzle.

The oddity of the whole affair was brought into sharp relief once again.

No fans there to cheer ‘well played’ to Cricklewood, no fans to give handshakes and consolations to Tons players.

Having lost last October’s reverse fixture 5-0, it was a decent result for the Tons.

The point keeps us in touch at the top of the table – although in what form the season will be continued (if at all) remains to be seen.