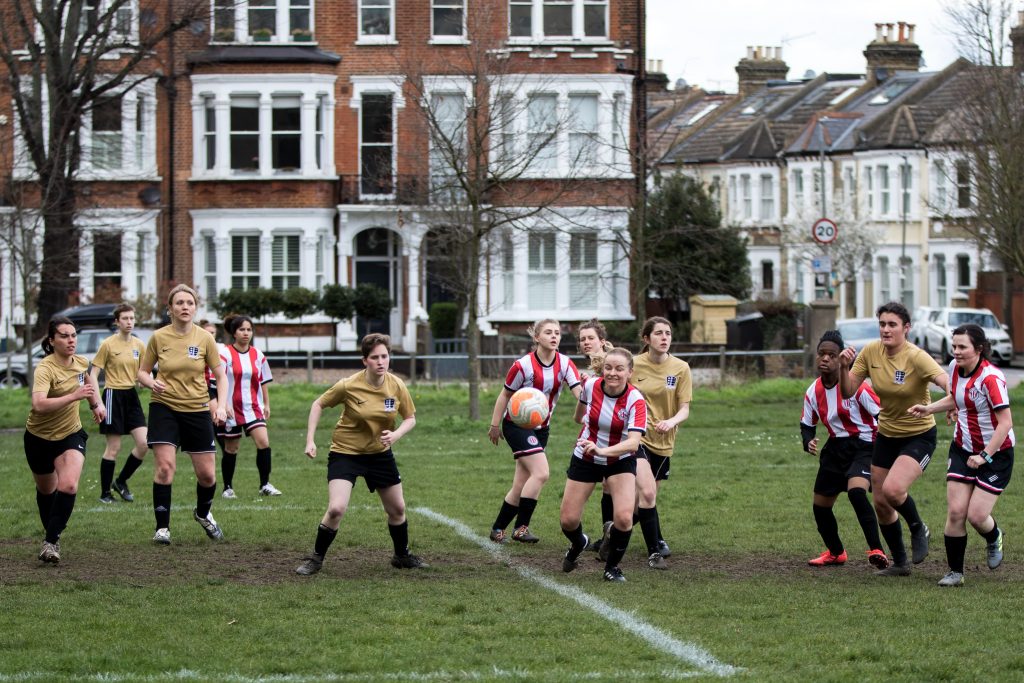 Rarely have a defeated team been so happy, the victors so respectful to their opponents and how apt was the eternal cliché – a game of two halves.

This was the Tuesday night training session for women and non-binary people on tour to Clapham Common for their first 11-aside game of football.

Although possessing a core of 8 players who have been selected for the successful Super5League team most of these players had never before experienced a 90-minute match, even some of those 5-stars who top the Thursday night league table.

In all, eighteen players turned out in the famous red and white stripes. Our opponents were our friends at Goal Diggers FC.

Their team was also selected from beginners and development players, but with some coaches in the team and more experience throughout the side they dominated the opening period of play.

An early penalty for handball was awarded and scored to put GDFC into the lead and they capitalised on the good start with pressure and pressing on the Tons goal which lead to another two quick strikes.

But Clapton CFC fought back into the game with pace down the flanks and robust ball winning and distribution from midfield led to corners and chances on goal.

Finally, one of those early balls from the centre was picked up by Lauren Ryan and challenged by the onrushing Goal Diggers keeper the ball spun loose, but Lauren was first to it and fending off covering defenders calmly put the ball away to put CCFC back in the game at 3-1.

Stung back onto the offence, Goal Diggers somewhat fortuitously found themselves 4-1 up and then closed the half with another goal to leave Clapton CCFC somewhat unjustly 5-1 down.

The fifteen-minute break was taken over by coaches Ellie Guedella and Julie Leaff who split the teams into two groups – the starting eleven for the second half and the bench – and began to weave their magic.

The second-half performance from The Tons was a joy to behold. These players have been coached for months by the Ellie-Julie-Byron coaching team and have produced a table topping 5s team and a supporting cast of improving technicians.

The next 45 minutes gave them an opportunity to show what has been learnt.

The team was more organised from defence and competitive in midfield and with pace in attack, Goal Diggers were rocked back as Clapton took hold of the game.

Burt then a setback! Another penalty for hand-ball was conceded to GDFC, but consistent with the second half narrative Chelsie Sparks saved the spot kick to the delight of almost everyone.

The final whistle was greeted with a satisfactory joy by the Tons who recognised that with the second half score at 0-0 another 90 minutes might have seen them victorious.

That extra 90 minutes will come again as the teams both agreed in principle to a rematch.

Goal Diggers FC were magnanimous in their recognition of Chelsie Sparks and Allana Scable as joint players of the match.

This is truly a team in development, with players not only enjoying the beautiful game but some deserving a chance with the first team, and coaches that are a great asset to Clapton CFC.