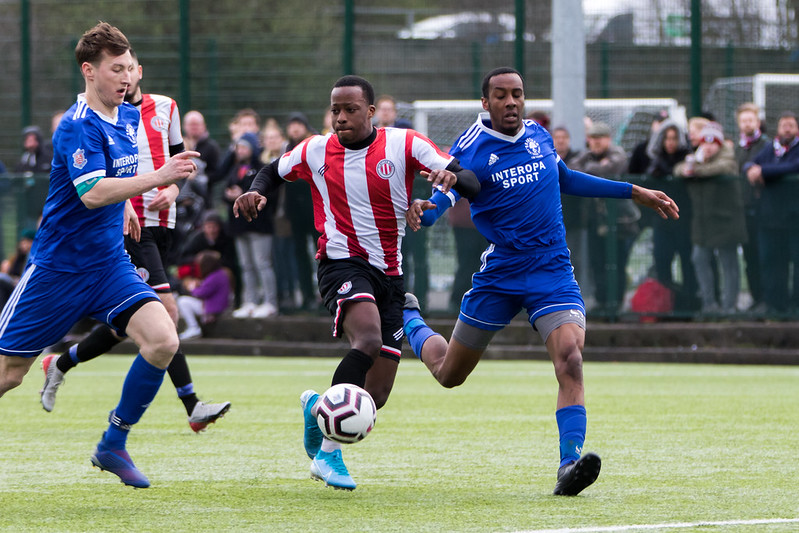 A novel thing: Clapton – at home – not that far from Clapton.

Not wanting to add to a mounting fixture backlog, the club decided to move this men’s match to Mabley Green in Hackney.

But the team couldn’t maintain the form that has seen them unbeaten at Fortress Wadham this term.

On the exposed 3G pitch, they struggled to find their rhythm and league leaders Brentham snatched the three points in injury time.

Strong gusts were making a mockery of the affair.

The best chances of the first half, at either end, were perfect mirror images.

A Brentham cross from the right fell to their permanently angry striker Ed Clements. However, he failed to judge the flight of the ball and did an air kick.

Then the exact same thing happened to Clapton’s Bilal Hussain after a cross in from the opposite corner.

Brentham took the lead on 58 minutes. Angry Ed Clements put a penalty into the bottom corner after a trip in the box.

Falling behind seemed to finally spark Clapton into life. Straight from the kick off Eliot Crosbie burst into the area and seemed to have been taken down by away keeper Harry Way. But the ref turned a blind eye.

Then Crosbie, on an absolute mission now, broke through again. He whacked it off the base of the post. It rebounded across the six yard box, but a Brentham defender lunged and turned past the post.

Then from the resultant corner, Julian Austin thumped home a header at the near post.

On 65, Brentham got back in front. A cross from the right was nodded in off the post by Angry Ed for his fourth goal against Clapton this season.

And again it seemed to awaken Clapton. Almost right away Sherwin Stanley latched on to a throughball and prodded past Way to make it 2-2.

Something in the Way

After that, the Tons seemed comfortable.

They almost got in front when Crosbie controlled a Stanley long throw and set up sub Noah Adejokun. The substitute hooked it towards the corner but Way made a spectacular save.

With the clock ticking down, a Brentham player was fouled in the middle of the park. The ref played advantage and the visitors poured forward. After the move broke down on the edge of the box, the ref brought it back for the freekick, as if we were playing rugby or something.

The visitors flighted the free kick into the box. It pinged around. Left winger Dale Malcolm-Adams managed to shin it into the net.

In fairness, he had been their one quality player throughout and praised the Clapton fans afterwards so we can just about forgive him.

Unfortunately this time Clapton didn’t have time to be spurred back into action. The referee called an end to the match just after the restart.

For Geoff Ocran’s team, this marks the exact halfway point of the season.

There are a lot of points still to be won.

Stu Purcell and Geoff Ocran give their thoughts.

Clapton’s midfield battler didn’t deserve to be on the losing side.