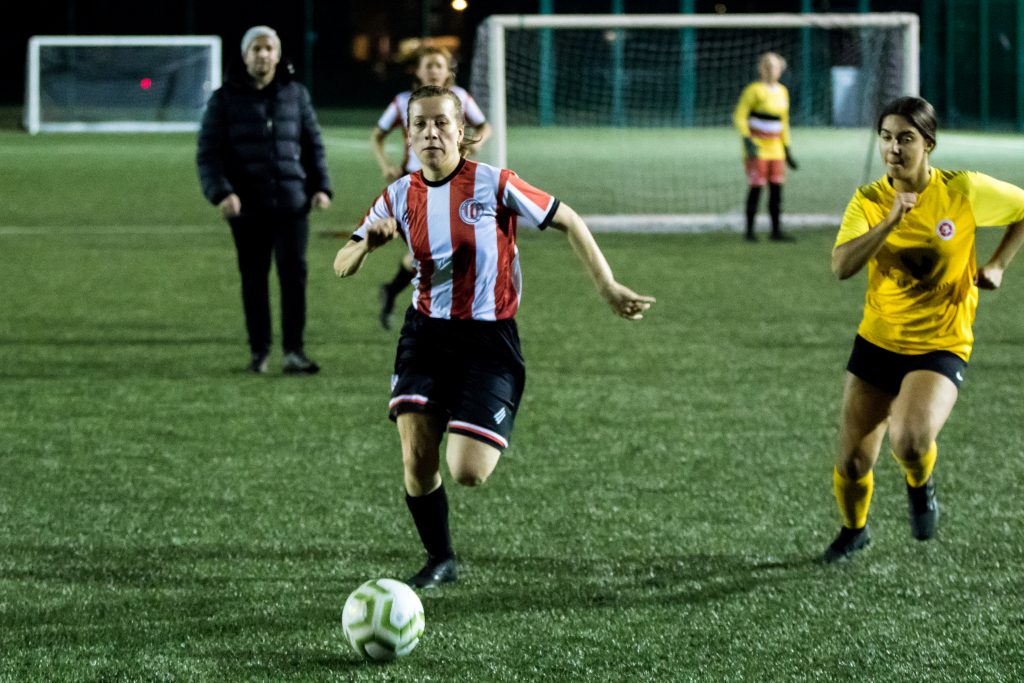 Straight from the whistle Todo’s forward ran through The Tons’ defence unopposed, problem was it was Clapton’s kick-off.

The game was restarted but it clearly showed how motivated the TDWFC players were to face the Invincibles of Clapton CFC.

Utilising a deep lying sweeper in a 1-3-0 formation the Ciudad were organised in defence with their goalkeeper calling out for the ‘blonde-girl’ to be marked, this may have confused the defence since the Tons were 80% fair-haired at this point.

With 4 wins from the first 4 games Clapton CFC came into this game with 3 changes from the last victory. Annabel Staff returned in goal after injury to replace the absent Chelsie Sparks and the Tons fielded two debutants, Allana Scable and Lauren Ryan.

Both players are graduates of the Tuesday night training sessions for women and non-binary people, a conveyor-belt of talent nurtured by coaches Julie Leaff and Ellie Guedalla.

Clapton CFC pressed forward with Allana showing pace and skill on the right wing forcing a succession of corners.

Lauren worked the left side cutting inside to outpace her marker and unleash a salvo of shots on goal.

Using the width of the pitch allowed space for Gabriella Monasso to rampage through the middle to threaten the Todo net and link up with her strike partners.

Todo counter attacks were broken up by Maylea Ma and Jess Loughan and their main threat came from goalkicks aimed directly at Tons’ net but all confidently fielded by custodian Annabel.

At the end of the first half the breakthrough goal nearly went to TDWFC when an intercepted pass was diverted low towards the corner of the goal only for Annabel to dive to her left and save superbly.

The Todo defence was finally unlocked by Lucy Rankin, once again coming off the bench for a second half match-winning cameo. Gabriella’s lofted corner kick could not be held by Ciudad’s keeper and the loose ball fell to Lucy who forced the ball into the net through the packed TD defence.

Tons should have added to their account. Lucy sent a free kick just over the bar and Jess after running the ball from defence through the whole Todo team just failed to find the net. Allana came back on to run and shoot and Maylea returned to shore up defence.

Todo had one more attack and with the last kick of the game sent in a scorching shot low and powerful but Annabel was equal to it, diving to her right to catch the ball safely and protect the clean sheet and the 100% record.