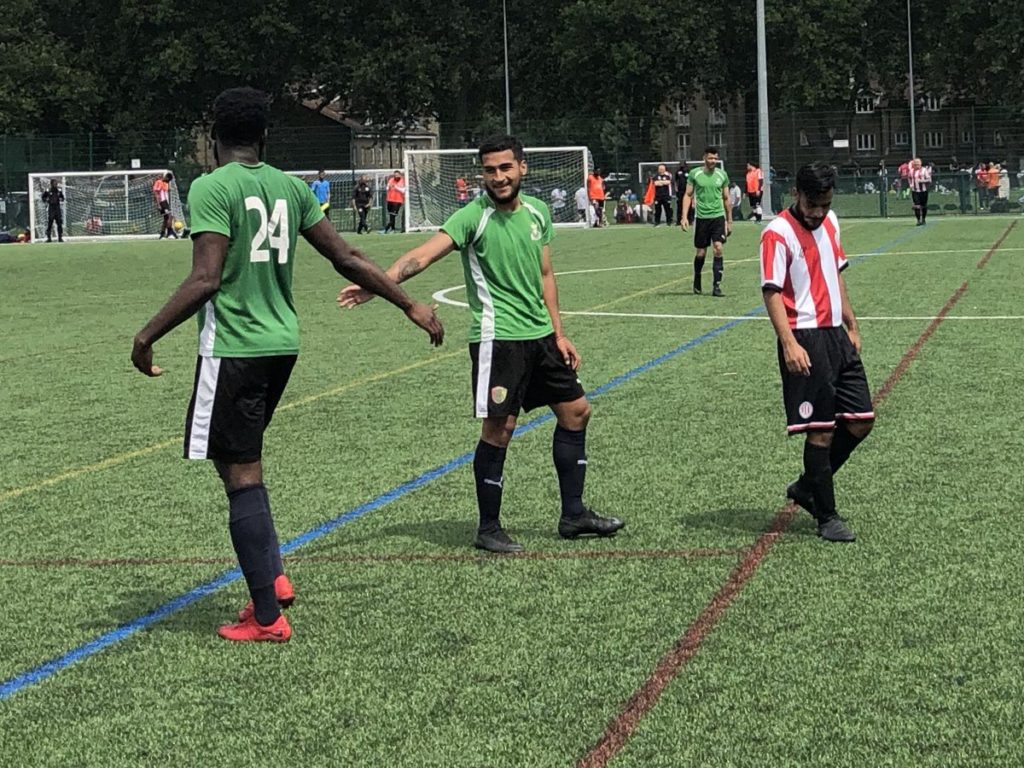 Clapton Community’s pre-season preparations continued with a 4-1 defeat to Lopes Tavares on Mabley Green. It was a closely contested game, but two late goals put a gloss on the scoreline for the Eastern Counties League Division One South side.

There were a couple more established players, compared to the side that won 3-2 against Wanderers in the first friendly a week ago. Prince Kwakye, Cemal Agdelen, Dean Bouho and Josh Adejokun all returned to get back in the swing of things. Ashley Headley started in nets.

Today’s Clapton CFC line-up for the away friendly vs @lopestavaresfc pic.twitter.com/iAkqp6ck0O

Tony Cookey, who played up front for Clapton last pre-season, was wearing the green of Lopes Tavares.

A game of three thirds

To give the managers a chance to try out different combinations, the match was played in three 30-minute periods.

On 13 minutes, Clapton old boy Cookey was played through on goal and calmly curled round Headley to make it 1-0.

In the middle period, Lopes’ Benjamin Oni won the ball near the centre circle and run unopposed through the empty Clapton half. He slotted home to make it 2-0 to the team nicknamed The Kings.

Nabeel Hashim had a smart turn and shot on the edge of the box, but it was just past the post.

As is typical of such games, multiple substitutions prevented any real rhythm from developing.

The Tons then pulled one back through David Nott. A ball came in from the right and the trialist turned and swept it in.

After two thirds, they changed ends. If there had been a slope or wind, this would have been unfair – but it was perfectly flat and calm.

Clapton started to look like the most likely to score next.

As with the previous week, Ellick Coleman came on and threatened. Saiid Jaffa was causing problems with his strength. Adejokun went through on goal, but had too much time if anything and the Lopes goalie smothered the ball before the winger could get his shot away.

As an outfield player in goals, Headley often tried to dribble it round pressing attackers. He almost got caught once, but done them a beauty twice.

On this occasion, Clapton’s comeback wasn’t to be.

The backline all claimed for offside, failing to play for the whistle. This allowed the whole Kings forward line to advance and basically walk the ball into the net. Jeff Idemudia applied the final touch.

The linesman who hadn’t flagged for offside? None other than Tons goalscorer David Nott.

There was more controversy when Headley appeared to have fairly plucked the ball away from the feet of an onrushing attacker. The Lopes Tavares man had tumbled over the Clapton keeper’s arm and the ref gave a penalty. Oscar Mendes rolled it into the corner to make it 4-1 to the hosts.

Pre season continued for us at @ClaptonCFC today. Good work out for some of the 1st team and trialists. Looking forward to Saturday though as we return to the Stray Dog again. Thanks to the fans who came to watch. Tons ! pic.twitter.com/xVo7toyeB0

Despite the result, one positive for Tons fans was the opportunity to see classy centre backs Jordan Odofin and Nick Loblack play together. Having conceded 45 goals in the league last season, it is one area where the management team will be keen to add more competition.

The evolution of Geoff Ocran‘s 2019/2020 squad continues next Saturday at home to Sporting Hackney.