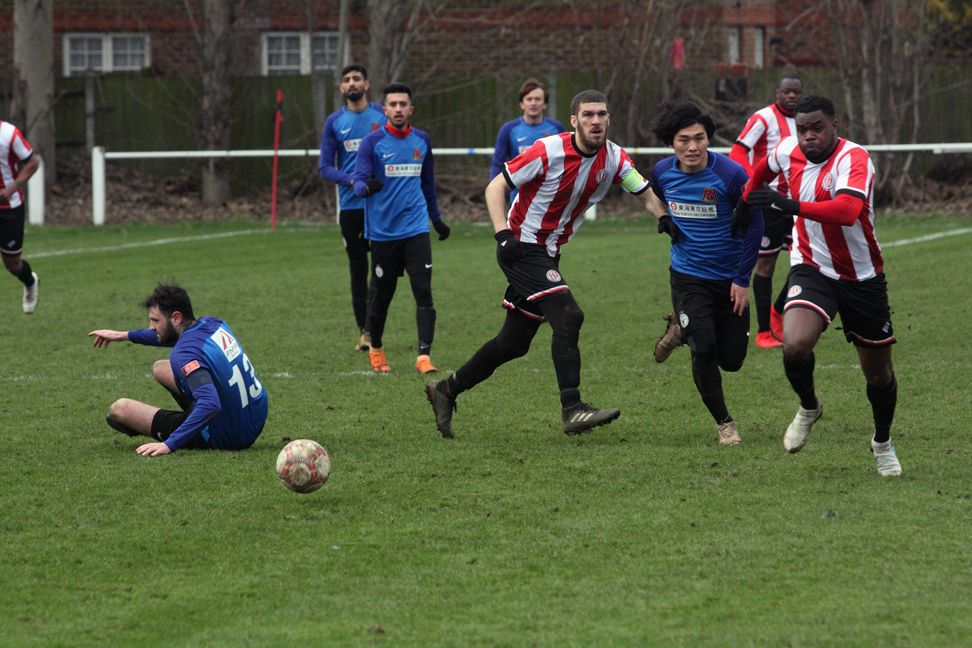 Following Clapton’s Easter resurrection against The Curve, more miracles are required against London Samurai this Saturday.

Another win would put the Tons within touching distance of the title, with only a game against FC Roast left to play. The same is true for Samurai, though, ahead of their league closer at FC Star next weekend.

The stakes are high on both sides.

Of Clapton’s three clashes with Samurai to date, it’s fair to say that luck has been on the side of Geoff Ocran‘s men.

First, the Tons squeezed a 1-0 win in a pre-season friendly on the 3G pitch next to the Stray Dog. This was largely due to a dominant Samurai squandering a number of good chances.

In the league game in Southall in November, Clapton were battered 5-1. But they later picked up the three points due to a penalty imposed on Samurai by the league for playing ineligible players.

In the Jim Rogers quarter final at the Stray Dog, a Yacine Rabia penalty sealed a nervy shootout win. It was good practice for his decisive spot kick in the final.

Clearly the outstanding team in the division, Samurai would have been home and hosed weeks ago were it not for the 12-point penalty.

However, their title chase has been hampered by a couple of draws in recent weeks. FC Star held them to 1-1 and they shared six goals with Ealing Town. Both games were at their Spikes Bridge Park home.

They currently sit just one point behind Clapton, with both teams having just two games to play. A draw would hand Stonewall the chance to clinch the title by winning away at Eastfield, also this Saturday.

Samurai manager Hideyuki Miyahara gave us his thoughts on the crucial clash:

This season so far, London Samurai have played 18, won 15, drew two and only lost one in the league. We have already won the league according to these results, but we have been deducted 12 points, so now we are at third on the table. I really want to win both of our last two matches so we still win the league. We have lost a few players who went back to Japan recently, but also we have got a few new players. In the last two matches, we played not bad, but unfortunately could not get the results. We just need to stay strong as a team and need to focus just to get 6 points to win the league properly.

Reflecting on Saturday’s last gasp victory over The Curve, Ocran told us he had faith in his side’s ability and determination to come from behind:

It’s one of those games where you can’t comprehend what’s happened. I didn’t think we were going to lose it at any point. I knew we’d get a draw at minimum. We’ve got this fighting spirit and we’ll never give in.

Looking forward to this weekend’s key clash, coach Sham Darr had the following to say:

Samurai’s a big game. If they win they can win the league. If we win, we can win the league. It’s a cup final. We’re confident. Since Christmas we’ve only lost one game. We’re one of the form teams and we know with Eliot and Sherwin upfront and with Dan between the sticks, we’ve got a chance to win.

For this game why not join the Clapton CFC family bike ride from our historic home, the Old Spotted Dog in Forest Gate, to our temporary home, The Stray Dog?

It will be a five-mile leisurely cycle marshalled by Newham Cyclists. There is also a feeder route joining from Hackney Downs. All the information, and to sign up, can be found here.

We’re on the pitch just left as you enter the Wadham Lodge car park. Look out for the Stray Dog sign!