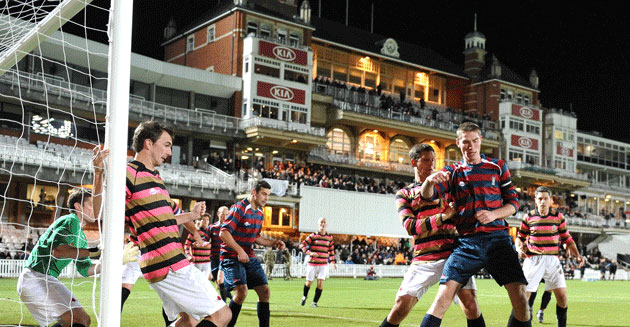 Never let it be said that we don’t like trying new things here at Clapton.

In a summer of firsts, we played in the first ever match at Holland FC’s new ground and Clapton CFC were the first MCFL club ever to compete in the final of the Supporters Direct Cup – against England’s first fan-owned club, Enfield Town.

This Saturday we play our first home game – at the newly-named Stray Dog ground – which may well be one of those ‘were you there?’ sorts of days.

As opponents, it doesn’t get much more iconic than facing Wanderers FC. They existed in their original form from just 1859 to 1887, during which time they reached 5 FA Cup finals – and won all of them.

In 2009, the club was reborn to raise money for good causes and replayed the first ever FA Cup final at The Oval, pictured above. They have since entered a team in the Surrey South Eastern Combination and have risen through the divisions with three consecutive promotions.

Fortunately Wanderers share our enthusiasm at being invited to play in this historic friendly. Mark Wilson, club secretary, said: “We’re really excited about Saturday’s game as we’ve followed the Clapton Ultras for some time.

“This is a fantastic opportunity for the new club to fill the void left by the old club; engaging with the local community, upholding well established ideals, and using football as a tool for social change.

“Wanderers stand for the same ideals as Clapton CFC and we see this as much a friendly match as a meeting of minds.”

On to on-field matters, and Wanderers are hopeful of some silverware as they continue towards their stated long-term aim – to play in the FA Cup again by 2031/2.

Wilson added; “Pre-season has been productive as we have recruited a lot of new players. Whilst we haven’t won all of the games, we’ve been very competitive and it’s given us the chance to field a lot of new guys.

“Our issue last season was with consistency. If we can field roughly the same eleven each week, we’re excellent.“

Clapton player-manager Geoff Ocran said: “Players have been looking forward to this game for a while and it’s no surprise that nearly everyone is available.

”It’s a historic day so we hope to put on a performance befitting of the occasion.”

There’s loads of time and effort gone into getting the ground ready for this one.

We have to say a massive THANK YOU to everyone – over 50 people – who has turned up to our midweek clean-up sessions. The spruce up has made a huge difference to the place.

A quick peek of our special edition programme for tomorrow’s game with @wanderersafc pic.twitter.com/IC9AfBLcs7

If you’re coming to The Stray Dog for the first time and are a bit unclear of how to get there, let us guide you!

The ground is about 20 minutes walk from Walthamstow Central station, going past at least 5 pubs along the way.

We’re on the pitch just left as you walk in through the car park. Unfortunately, we won’t have any food on the day. Something we hope to sort out for future games. There is a bar at the ground through selling draft and canned beers and more.

At the entrance to the ground we’ll have a special edition programme, enamel badges, T-shirts and sweatshirts on our merch stall. It’s also your last chance to pre-order the home or away shirt in time to add it on to the current batch being manufactured.

It’s ‘pay what you like’ at the entrance (suggested donation £2 for adults), essentially just to cover fees.