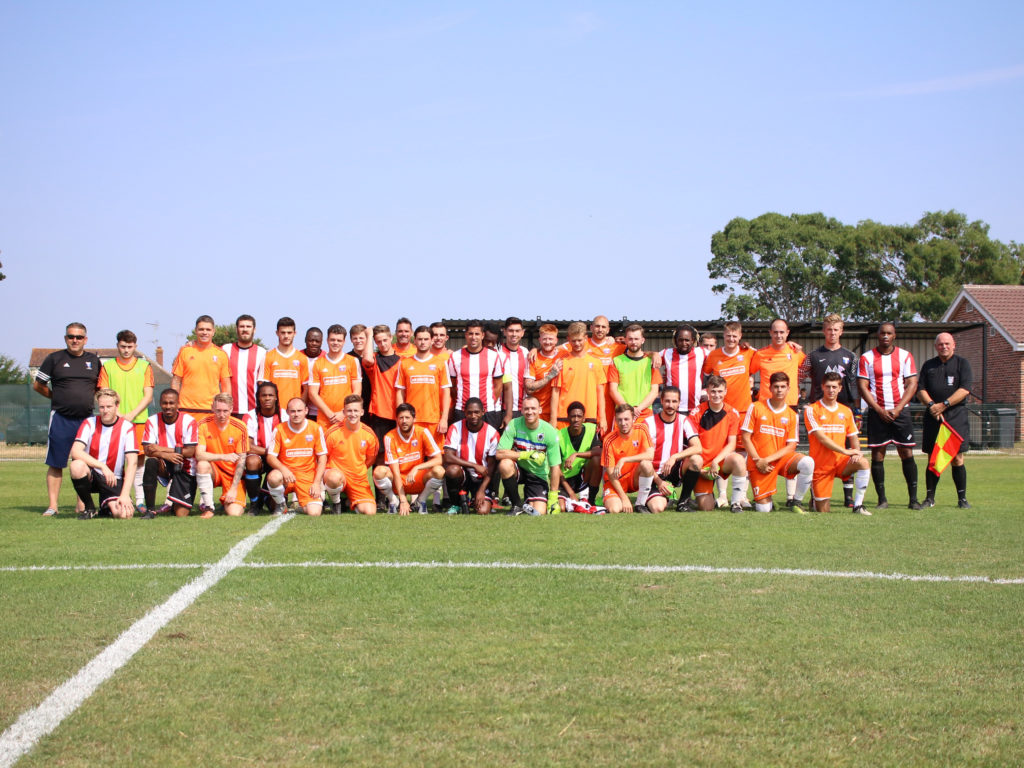 A joyous day by the seaside saw Holland FC open their new £550,000 ground with a bumper crowd and a thumping win – while Clapton CFC’s new-look side took plenty of positives on their very first outing.

The historic match was delayed by 30 minutes due to traffic congestion heading towards the coast. In the end 155 people crammed into the neat and impressive Eastcliff Recreation Ground, yards from the beach, with huge queues all day at the bar.

Player-manager Geoff Ocran picked himself and coach Yacine Rabia for the game. We’ll introduce the players properly soon but in the meantime here’s a sneak peek of the full line-up.

First ever Clapton CFC team. Kick off 5 mins away… pic.twitter.com/o3irYd52Xz

Holland FC, who play two levels above Clapton CFC and whose league campaign begins in just two weeks, cruised to a 3-0 lead at half-time. For the second half they were able to change their entire team to bring on fresh legs.

The clash came much earlier in the Tons’ pre-season, after only a few weeks of training and a full six weeks before the Middlesex County League season begins.

However, the makeshift side grew in confidence, going close several times in the second half, while the biggest positive was the fitness challenge of playing 90 minutes in scorching heat.

After the game, Ocran told us: “I think we started well. It really was a fitness test. They’re well ahead in pre-season, they’ve played numerous games together.

“This was our first game together. We’ve been training a couple of weeks so a lot of them don’t know each other and their strengths.

“So for a team put together to play a Step 6 side I thought there were a lot of positives to take considering we’re playing at Step 8.

“Most players understood after the game in the dressing room, they weren’t too down, they took the positives.”

Geoff Ocran and Romelle Pile’s thoughts on our first match, a 5-0 loss in a friendly against Holland FC to open their brand new ground.

Romelle Pile, who caught the eye on the right, added: “It was a good one for the fitness and getting to know how each other play.

“The more we play, the more we improve. It’s just a learning curve for us to progress and get better as a team.”

Friendships were forged between the two community-focused clubs, with fans and players on both sides applauding each other after a fantastic day in the sun.

The Holland FC website described it as “a landmark day” and added: “Great support from Clapton CFC away supporters who did not stop singing the whole game. Great day all round for the Mighty Holland.”

And there was a touching final gesture from the Clapton CFC side. A bottle of Pussers Rum was handed over to the Holland FC board with the instruction that it can only be opened when the new ground sees promotion.

This tradition was last observed when Clapton gifted Aldershot Town with the same type of rum on their first game back following their revival in 1992. The Shots opened and toasted the rum when they reached the Football League in 2007.