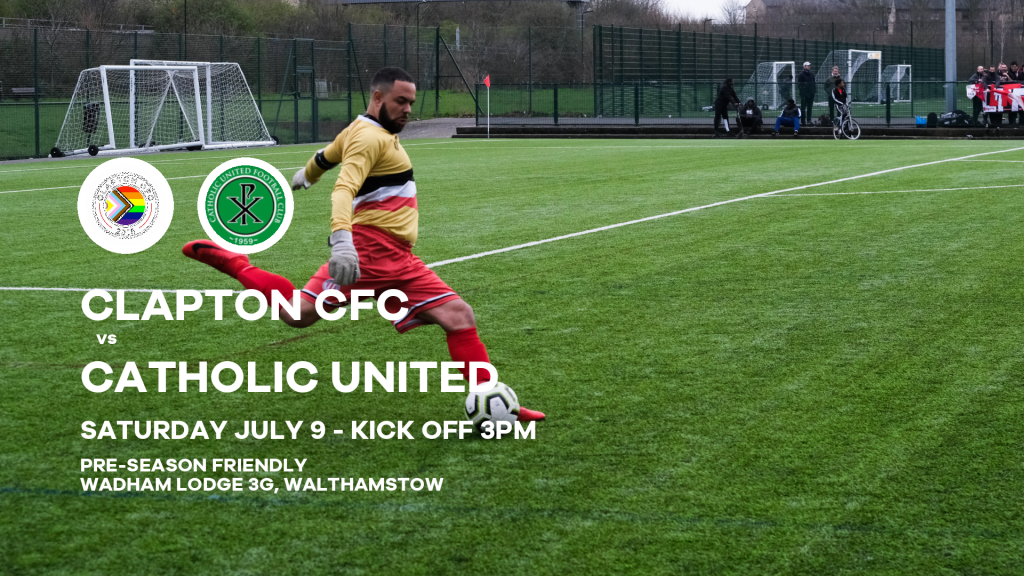 It’s a return to Walthamstow this Saturday for the men’s first team’s third low-key pre-season friendly of the summer, kick off 3pm.

So far there’s been an in-house training match against the CCFC development team and then against friends CSM London.

Meanwhile Catholic United have only just returned to pre-season training last Saturday, so it’s still early days for both squads.

This game is on the 3G at Wadham Lodge, to give our volunteers at the Old Spotted Dog Ground a week’s rest in the middle of a busy run of games.

Their big news, however, was the transfer of their former youth player Cameron Carter-Vickers from Tottenham Hotspur to Celtic provoked huge interest in the Essex Bhoys.

As an example, Twitter followers have grown from 2,600 to 22,400 since, and they’ll be live streaming their games to cater for the worldwide Celtic fanbase it has awakened.

This will be our third meeting, but the only one that mattered was our first, the 5-1 defeat in the Anagram Records Trophy final in 2019.

At the time they were a level higher than us, and although now we’re on par, they’re undoubtedly one of the best Step 7 sides around.

The Superhoops have been around in one form or another since the 1930s, first as Southend Catholic, then as Catholic Athletic.

They took their current guise as Catholic United in 1959 and the green and white hoops kit were a gift from Celtic in 1968.

The 3G pitch has no cover although the weather forecast is good, and you will need to stand outside the 3G cage, so this friendly is one for the hardcore.

It’s donate what you want to watch, no advanced tickets needed. For friendlies we suggest £2 for waged adults.

After the game, from 7pm to 8pm, The Old Spotted Dog Ground is hosting a spoken word show by Heidi Henders as part of the Newham Word Festival. It’s called ‘This space belongs to none of us, this space belongs to all‘ and it’s free, but you need to book a spot.

More information on the festival website and book your place for the show here.