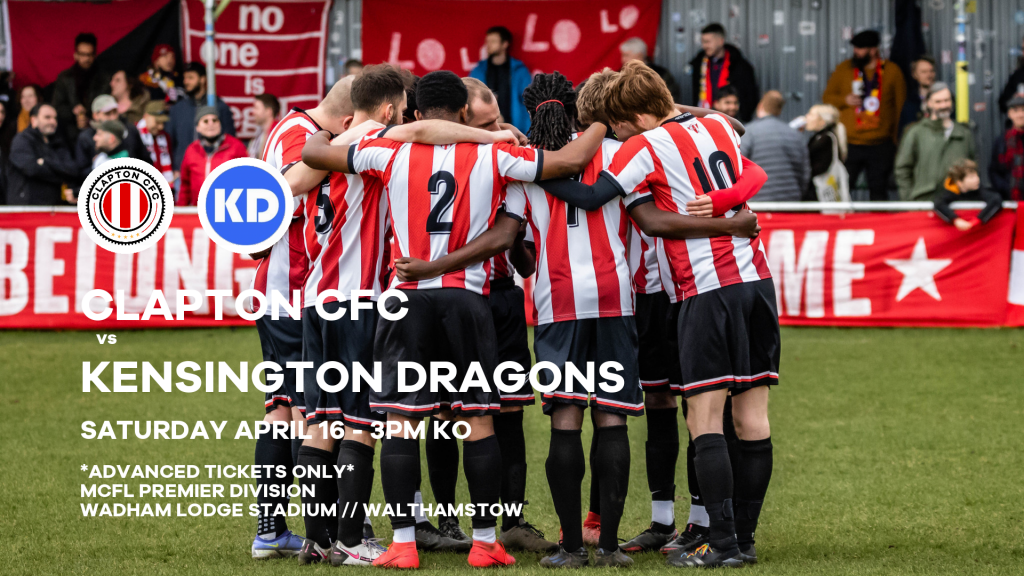 In something of a dress rehearsal for the Alec Smith Premier Division Cup Final next month, The Tons welcome fellow finalists Kensington Dragons to Wadham Lodge Stadium for an all-ticket game on Saturday.

Our away fixture at the end of October was actually our first ever meeting too. It ended in a 4-0 CCFC win with goals from Sherwin Stanley (2), Fred Taylor, and James Briggs.

Fire in their bellies

This upcoming fixture is likely to be a much sterner test for the red and whites than last time out. While finding themselves in 9th place as things stand, the Dragons have won four of their last five fixtures, finding the net 14 times in the process.

Although they lost last time out at home to Stonewall, they are currently one of the form teams in the division.

More about our opponents

The youngsters wanted to play regular football matches and after hard work from parents and players, Kensington Dragons was formed. The club has expanded over the years to now have eight boys’ teams, five girls’ teams and three men’s teams.

It is a registered charity and run by the trustees and a committee made up of club officers, managers and coaches. The charity’s objects are “to promote community participation of, primarily, children and young people regardless of race, sex, creed, financial means or social and economic circumstances.”

As you will no doubt know, last Saturday’s game against Brentham was abandoned due to a mass brawl between players of both teams that the referee was unable to contain.

More details, including an apology from Geoff Ocran on behalf of the players, have been sent to members in the latest newsletter and will be in the match programme.

Club members have also been invited to an online meeting on Thursday night to discuss the way forward. If any members have not received the newsletter, they can email comms@claptoncfc.co.uk.

As a club, we want to regain the friendly, positive and enjoyable atmosphere we have all worked so hard to create.

That means the game against Kensington Dragons will go ahead with some restrictions imposed by our league and home venue.

You may think some of these measures are extreme or unfair, however the only way for these restrictions to be eased at our games in the future is to comply with them.

We need to regain everyone’s trust first before we can ease these restrictions for future games and return to a normal matchday experience.

With football returning to the Old Spotted Dog Ground within days plus a semi-final and two cup finals, there’s so much to look forward to once we’ve navigated this hurdle.

Despite the restrictions, we hope to see as many of you as possible on Saturday to support both the team and the club as a whole, so we can move forward together.

Don’t forget the hygiene bank collection for our charity partners Magpie Project at every home game. You can donate toothbrushes, toothpaste, shower gel, sanitary towels and deodorant at the entrance.

Pick up the mini-programme for free or for a small donation.

You can catch a bus along that route too. The 357, 34, 97, 215 will all take you to the top of Brookscroft Road from Walthamstow Central. It will take about 12 minutes. Traffic has been pretty heavy in recent weeks so if arriving by the Victoria Line or the Gospel Oak to Barking Line, you can alight at Blackhorse Road Station. The 123 from the stop opposite the station on Forest Road will take you as far as the crossroads with Hoe Street/Chingford Road – alight at the stop for Bromley Road.

There’s also car parking space available at the ground but it may be better to park on a street nearby.