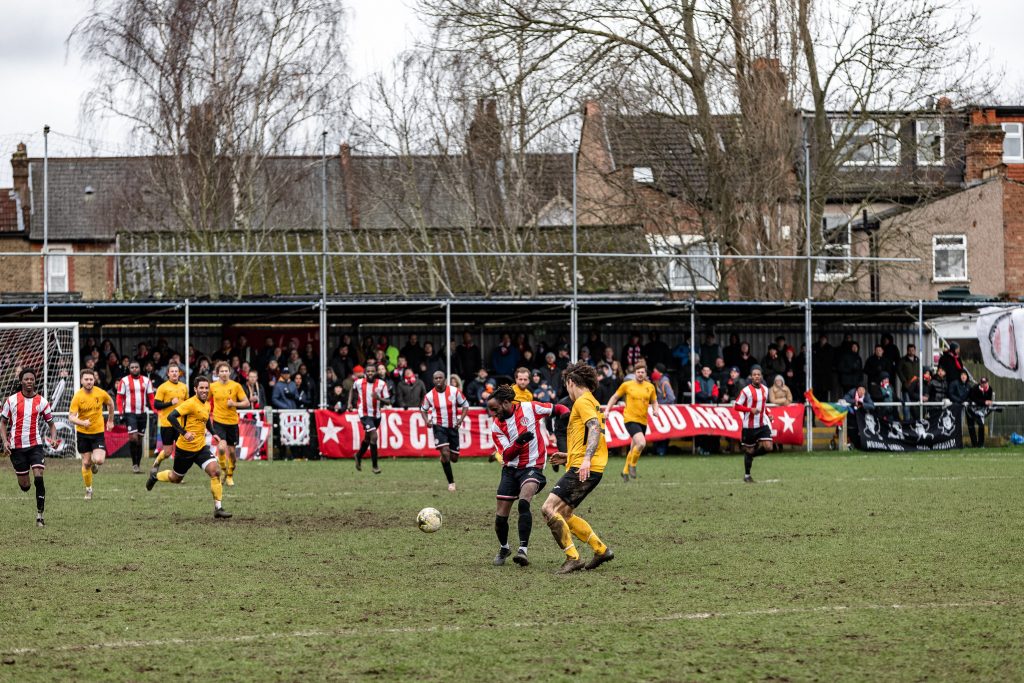 The men’s first team’s run in the BBC Essex Premier Cup is over at the semi-final stage after a disappointing performance at home to Woodford East.

After beating four Essex Olympian League sides in the competition, it was our first encounter with an Essex Alliance League side.

The visiting Peacocks adapted better to the heavy Wadham Lodge Stadium pitch and scored with a header from their first attack.

The Tons enjoyed plenty of possession, but few clear-cut chances, with Julian Austin blasting over the bar, and Fred Taylor being booked in the box when it looked like he’d been fouled.

And it was Woodford East who grabbed a second goal midway through the first half on a swift breakaway. A cross and first-time volley gave Dan Anfossy no chance.

Just before half-time, CCFC grabbed a lifeline, this time the ref ruling that Taylor had been fouled on a run towards goal, and James Briggs slotting home the penalty.

But there was still time for another goal before the referee’s half-time whistle, and it went to the away side. CCFC were undone once again on a quick counter-attack and an inch-perfect shot into the top corner.

3-1 at half-time then and Clapton CFC had a mountain to climb, but despite more possession failed to create a clear-cut chance, save for a late goalmouth scramble.

A succession of subs – including the welcome return of midfielder Paul Oshin after a long injury – couldn’t break through Woodford’s stubborn defence.

At the other end Anfossy wasn’t at fault with any of the goals, and didn’t have a lot else to do except a fine late save.

The management, players and fans couldn’t hide their disappointment at missing out of a cup final, while congratulating the winners on a deserved win.

However, there’s still another cup semi-final next week, and a promotion campaign, so the season is still very much alive.