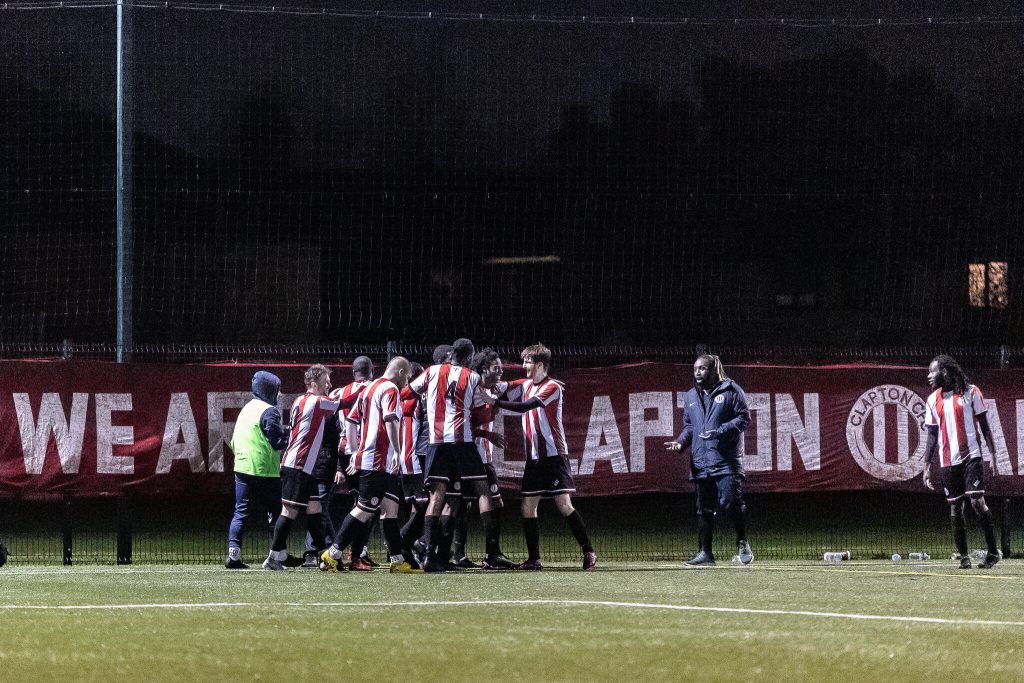 The Clapton CFC men’s first team notched up their 50th competitive win but they didn’t have it all their own way in this cup tie.

With the Stray Dog pitch unplayable, this BBC Essex Premier Cup tie was moved to the Wadham Lodge 3G to avoid a postponement and a fixture backlog.

Despite the terrible weather, the open air, the mud underfoot, and having to watch through fencing, a decent crowd enjoyed a great end-to-end game.

The Ramblers – who play at the same level as us in the Essex Olympian Football League Premier – enjoyed plenty of possession and were shooting on sight from all angles.

In fact they hit the bar three times in the first half alone while Anfossy was forced into action for a series of saves.

However, the Tons were using their pace on the break and that led to the first goal on 23 minutes. Player of the match Noah Adejokun sprinted down the right and squared to older brother Josh Adejokun to smash it in from close range.

The lead lasted 12 minutes, with a Rambler turning in the box and rolling the equaliser in off the post, finally beating Anfossy.

But within a few minutes, a great passing team move ended with Sherwin Stanley crossing and Jake Stevens beating the keeper at the near post.

It was 2-1 to CCFC at half-time, but within 2 minutes the Ramblers had levelled up for the second time, once again striking the crossbar but this one bouncing down and in.

Gradually, however, we took control of the game, and with 13 minutes left got our noses in front again, a great cross from Noah Adejokun finding Julian Austin who headed it in at the second attempt.

On 84 minutes, it was game over, with a quick breakaway finding its way through to Noah Adejokun who clipped the ball over the keeper for 4-2. By this stage Noah was also wearing the captain’s armband to cap a memorable day.

A great return to form for the Tons in tricky conditions against good opposition and we’re now in the last 8 of the county cup.

We’ll be joined by Catholic United, Sungate and Manford Way of the Essex Olympian League and Stanway Pegasus and Tiptree Heath of the Essex & Suffolk Border League, plus the winners of two games postponed yesterday.