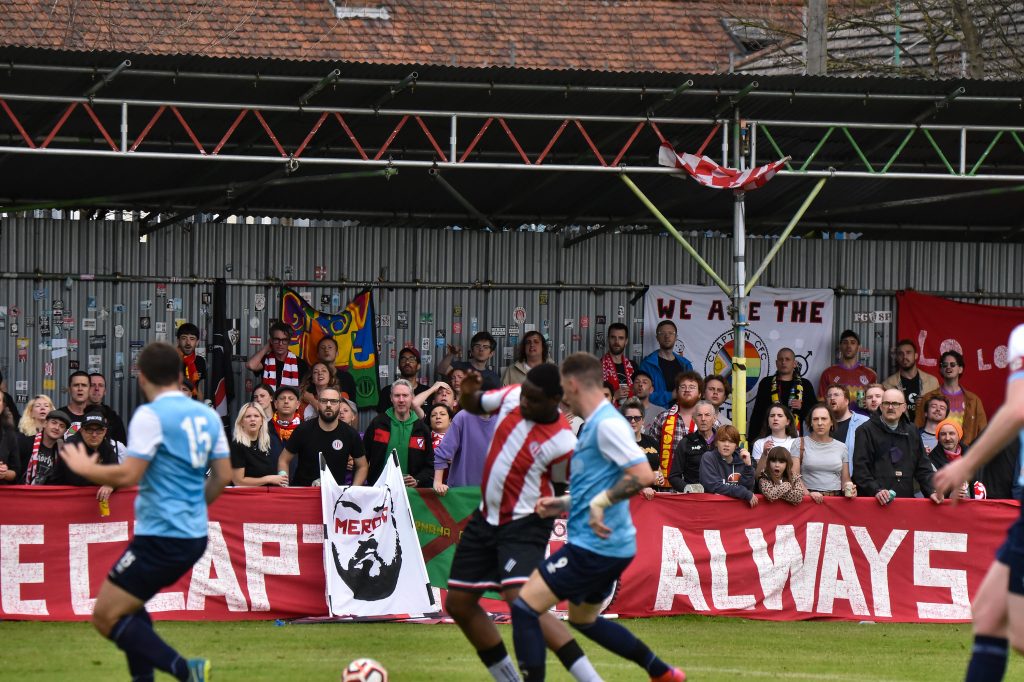 Famous American football coach Vince Lombardi once said that “Perfection is not attainable but if we chase perfection then we will catch excellence”, the game against CB Hounslow United was this mantra personified. Were both teams perfect? That would be a resounding no but was that an excellent game of football, maybe the best you’d seen all year? Then surely the answer would be yes.

There was a strange thickness in the air when I approached the Stray Dog, it was one of those ‘last days of summer’ weather cycles. Where you find yourself reaching for the rain mac every other minute and then wishing you’d worn shorts every other five. The ground was damp but occasionally dry, leading a very fast-paced game in spurts and then periods of slow tackling. It made for a match at odds with itself, which can only explain the scoreline. Clapton 8 – Hounslow United 6.

The Tons fielded a similar line-up to the team that played against FC Soma, with a couple of omissions starting on the bench and Arthur Wright sitting behind the front three.

Within minutes of the 3:03 Kick-Off, there was a driving attack into the heart of Clapton’s defence with Luke Gilbert for Hounslow firing a right-footed shot just past the left-hand post of Clapton’s goal. This would become a running theme for Hounslow over the course of the next 45 minutes, continually invading and finding space within our half. These expeditions, however, were cut short by incredible footwork from Wright and Noah Adejokun between 3:08 and 3:12.

Then the onslaught begins again, waves of Hounslow players rush into Clapton’s half. I’m standing next to the Hounslow box and all you can hear is the fervour of the team screaming their players onward – “Pass It! Pass It! Pass it!”.  They don’t and the ball goes out for a corner but we already know what’s going to happen here. Hounslow knows, Clapton know and I’m guessing we in the crowd do too.

The play resumes and Hounslow’s Jon Lloyd flies toward the Clapton goalmouth. Our hearts are in our mouths…Not again. Thankfully Jack Francis flies out. SAVED!

Then, the ball is back out into play again. Time seems to slow down as some fancy footwork gets the ball in front of Hounslow’s goal and to the feet of Aaron Yfeko. There’s the crackle of excitement from the crowd as we see Yfeko stop, dummy and intelligently drop the ball into the corner of the net.

There is no respite, I can barely type out my notes from the Clapton goal when I look up to see Hounslow running towards Jack in goal. It’s Lloyd for Hounslow again, baring down on Francis. Almost as if there’s been a vendetta formed over the course of the past few minutes. Number #11’s right-foot rifling the ball from outside the box into the right-hand corner of the goal.

There are 240 Seconds in 4 minutes. That’s 24,000 Milliseconds. Think about what you could achieve in that time? You could listen to “Burning Down The House” by Talking Heads (4:01) or you could read 80 Tweets or you could do what Clapton did and work the ball into the Hounslow box to the feet of N.Adejokun, whose superb strike from just outside the box brings Clapton level.

There was an unrelenting nature to this game, something you’d more likely see in the mountain stages of the Tour De France or a great Wimbledon final. It felt as if nothing could slow the pace of this runaway train of a game but Sport is unpredictable and in its nature to throw spanners into the engine. The game is halted after Gilbert for Hounslow lands awkwardly following an aerial battle. The physio is called on and after a couple of minutes of treatment and some very harsh words with the ref from the Hounslow bench, who was contesting a substitution while the man was still on the pitch, Tyreer Kasim is brought on for the injured Gilbert (15:33).

The war of attrition continues, after a corner that went straight into Francis’ hands (15:35). A challenge from Musa Manneh into Hounslow’s Brown leads to the physio being brought on again. There is a sense of foreboding emanating from the Hounslow bench. Tensions are beginning to flare, as they feel the challenges against their players aren’t being justly punished. This starts a chain of events that’ll come into play towards the end of the match. The injured Brown is replaced with Arian Nabolli for Hounslow (15:39)

As I mentioned earlier, Sport is unpredictable and within 1 minute of that substitution the following happens;

– Hounslow run rampant into Clapton’s half, a quick well worked ball, and there it is…

– Kick-off again, Clapton loses the ball, Hounslow works it to the outside of Clapton’s box, shoot, it’s deflected and …..

Another substitution for Hounslow now. Are they trying to park the bus? Dan Pocock on for Lloyd (15:42)

There appears to be a quiet falling over the crowd, people begin to check their watches for the approach of half-time. The friends standing next to me. One of which was at her first Clapton game is talking about whether to get a pint or not. They agree against it, as they know there could be a goal at any moment. They weren’t wrong.

Clapton strives into the Hounslow half, there’s some light drizzle coming down now. So, the pitch is wet. More sliding than a water park. Fama Sangare shoots, deflection, and…

Once More Unto the Breach, Dear Friends

Barely a moment to catch our breath and we’re off again (15:56 – Second Half), Clapton looks like a team possessed. Straight away, we’re driving into the Hounslow half and then it happens…N.Adejokun is pulled down in the box and…

There are screams of “REF!!!! from the Hounslow bench as Yfeko steps up to be the man of the hour, the crowd stops its rendition of “Maggie’s in the Mud”. We look on with fearful anticipation, we’ve all had our fill of penalties this summer…

What follows now is a period of, “Are we sure this game is real?”. It’s end to end. Another corner to Clapton, Just wide! (16:05), Tough tackle from Hounslow’s Adam Knight on Sangare. Free-Kick, just wide again! Hounslow sub on Gilbert for Pocock.

Nine minutes have passed since the last penalty, and clearly not wanting to disappoint the Bruno Fernandes fans in the crowd today. Hounslow repeats the exact same tactic against Clapton again. Another Penalty is given to The Tons!

The tensions are beginning to mount with the Hounslow players. Gilbert specifically has had enough and is bearing down on the ref for some of the decisions that have gone against him and his teammates today. The ref is having none of it, the yellows pulled out and given. This decision has a backdrop of the Hounslow bench screaming “Peanut! For Godsake!”, which is reminiscent of someone trying to give instruction to their partner for what toppings they want on their ice cream factory across a busy Pizza Hut.

Two minutes later, Reid for Hounslow sends an absolute rocket against Francis’ left-hand post. You can hear the “Clang!” from the halfway line (16:17).

The resulting deflection from the post into the trawl of players gives Clapton the ball and with it another chance. Some incredibly intelligent play from the team is reminiscent of Pep’s Barcelona. Passing, Movement, Passing, Triangles, and then…

Both teams see this goal as a chance to change things up, so the following subs happen between 16:20 and 16:24.

– Josh Adejokun on for Yfeko – Clapton

– Pocock on for Stef Livingstone – Hounslow

– Charlie Fagan on for Sangare – Clapton

Believe it or not, there are two minutes of calm before…..

An almost identical cut and paste of the previous goal. Hounslow will not be happy with themselves there.

Over the next 5 minutes, we have a rejuvenated Hounslow on the attack. Some very safe hands from Francis after a long throw straight out of the Rory Delap playbook from Hounslow and some solid defending from Clapton too. This leads to the next phase of play from Clapton into the Hounslow half again. N.Adejokun running rampant down the left-wing passed one defender, then the next, and then…HE’S BROUGHT DOWN AGAIN!

Now, with Yfeko on the bench having been subbed it’s up to Jake Stevens to take the weight upon his shoulders. Heavy is the head that wears the crown and all that. He steps up and IT’S SAVED! The ball goes wide for a throw-in.

Wait, the Linesman’s got his flag up. The keeper was off his line. Hounslow is incensed! Their defender Shane O’Connell rushes towards the ref, voices raised followed by the yellow being raised. The Hounslow bench can’t believe what they’re seeing, the penalty is going to be retaken!

This is getting ridiculous now, the crowd is going wild. However, remember what I said about 4 minutes earlier on. Well, just like Clapton. Hounslow uses four minutes to regroup and after an offside (16:36) they work the ball into the box and with a Tony Yeboah-esque volley score.

One minute later, Hounslow is back at it. Cross into the Clapton box, head on it, and…

Just to really hammer home the point here, 85 minutes have been played and we’ve seen 14 goals. There are five minutes left to go on the clock and we have yet to see the most bizarre thing this match had to offer. Now, I was around 15 metres away from this. So, I’m going to try and explain the next sequence of events as best I can.

Clapton win a free kick (16:40), just outside of Hounslow’s box. The Hounslow bench (to the left of me) doesn’t think it’s fair. The free-kick isn’t taken and Clapton makes a substitution, Cemal Agdelen for Geoff Ocran (16:42), something is said between one of the Clapton players and one of Hounslow’s players, and to quote Mike Tyson “Everyone has a plan until they get punched in the mouth”.

There is an entire team brawl. Hands are on throats, people getting shoved. It’s getting rowdy and my word count is going through the roof. Somehow, the ref regains control and no cards are shown.

And finally, the full-time whistle rings out across The Stray Dog at 16:45. I’ve never seen anything like it. It wasn’t perfect but my god was it excellent.

The three penalties were the only ones we caught on camera.