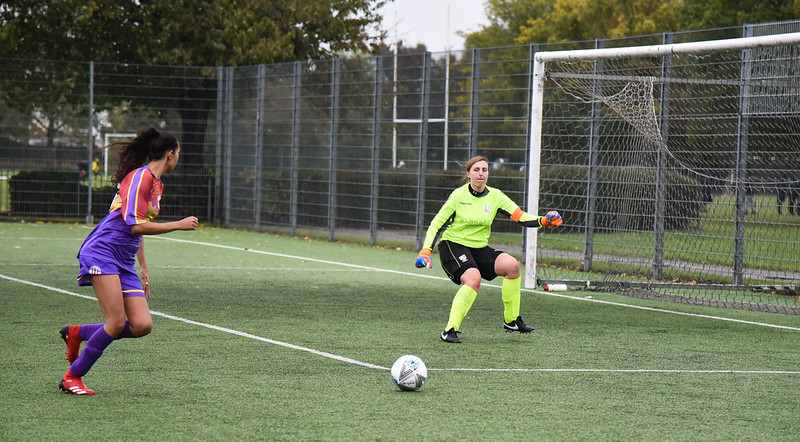 A stunning last-gasp winner from super-sub Larissa Vieira finally beat a stubborn Hampton & Richmond Borough to send the Clapton CFC women’s team to the top of the table.

Cancelled and delayed trains caused issues travelling way out west to Feltham, so the management made a few last minute changes to the starting line up.

In relentless rain and wind, the first half was a scrappy affair with the Tons frequently frustrated by offside calls.

The best chance saw Chelsie Osborne marauding forward and pinging a perfect ball to the back post, where Lenny Holmes‘ instinctive shot was smothered by the keeper for a corner.

A rather forgettable half in all, but the Tons immediately exerted full control of the game after the break, pinning the Beavers down in their area.

Wave after wave of attacks saw Vieira – brought on at half-time – and Emily Link take turns to fire potshots from the edge of the box, all comfortably saved.

The dangerous Vieira stormed through again, delivering a cross which beat the keeper and agonisingly rolled across the line. However, a home defender superbly shielded it away to safety as Maria Mendonca tried to nudge it into the net.

It looked like it wouldn’t be the Tons’ day when on 83 minutes, Vieira beat two players and shot on goal. The ball squeezed under the keeper and trickled either or on over the line before being cleared by a defender. However, the officials waved away the Clapton players’ claims that the ball had crossed over the line. Still no goal with time rapidly running out.

With five minutes remaining, Vieira’s corner was blocked at the near post. Undeterred, the winger won the loose ball and from 25 yards out struck it sweetly into the top corner. A worldie worthy of winning any game.

The breakthrough spurred Hampton & Richmond Borough into pushing forward looking for a late leveller, and goalkeeper Polly Adams came out to deal with a couple of dangerous balls into the box.

But the Tons comfortably held on for a clean sheet and three points that fires them to the top of the table, although having played more than rivals.

Overall a deserved win for the Tons who kept composed and creative in search of a winner, but credit must also be given to a fantastic defensive and goalkeeping performance from the hosts which very nearly nabbed them a point.