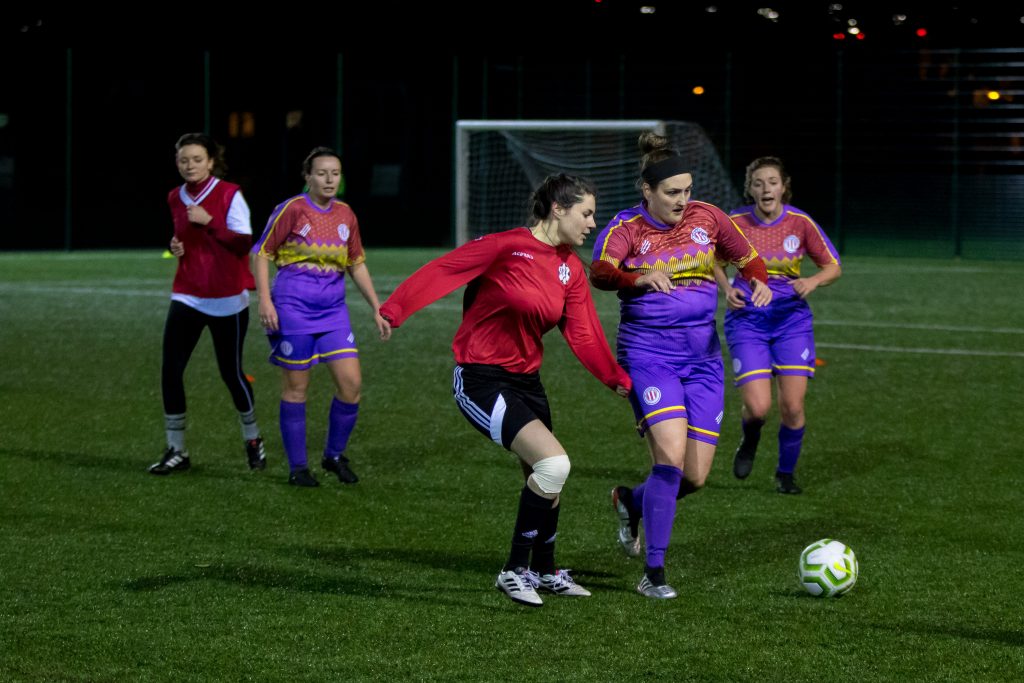 We were immediately thrown into unfamiliar circumstances. Firstly, with The Tons playing in our iconic Spanish Republican inspired away kit for the first time, and then within seconds of kick-off Islington Reds took the lead.

For the first time in Super 5 League competition Clapton were behind.

Caught cold, the players roused themselves from the re-start and soon warmed to the challenge.

Rhianne Wright and Chelsie Sparks were back in the side and along with Gabriella Monasso, Jess Loughnan, and Annabel Staff in goal the familiar pattern of passing and movement began to be asserted.

Reds fought to contain and operated with a defensive formation looking to break with three players leaving a deep-lying centre-back at all times to guard against Tons’ counter-attacks.

With space being shut down Rhianne drove down the left wing beating a couple of challenges before cutting inside to drill the ball into the net for a well-deserved equaliser.

Jess came close to scoring after a neat exchange of passes with Gabi saw her beat the keeper in a tackle only to see her shot hit the post.

Undeterred CCFC continued to press forward, this time Rhianne combined with Gabriella whose shot beat keeper and post to put the Tons into the lead.

At the start of the second half Reds came out with renewed determination but Maylea marked and harried and Jess swept up to keep Islington at bay. Forced into long range shots at goal Reds struck the bar twice in quick succession.

Lucy Rankin was brought into play and quickly forced Tons back onto the attack but shot after shot from Chelsie, Rhianne and Lucy struck the post or were cleared off the line or strayed just wide of target.

Reds threatened a couple of times, but Annabel cleared confidently, and Jess used her pace to outrun the breaking waves of attack.

Once again Red’s only route to goal was direct and with 5 minutes to go a thunderbolt shot was unleased from outside the box beating Annabel for pace and power.

Tons did not give up and in the last minute Rhianne ran through the Red lines only to see her low shot once again strike the post.

The Clapton players reacted to the final whistle as if defeated but CCFC still sit at the top of the table unbeaten and with important experience gained from another dominant performance.