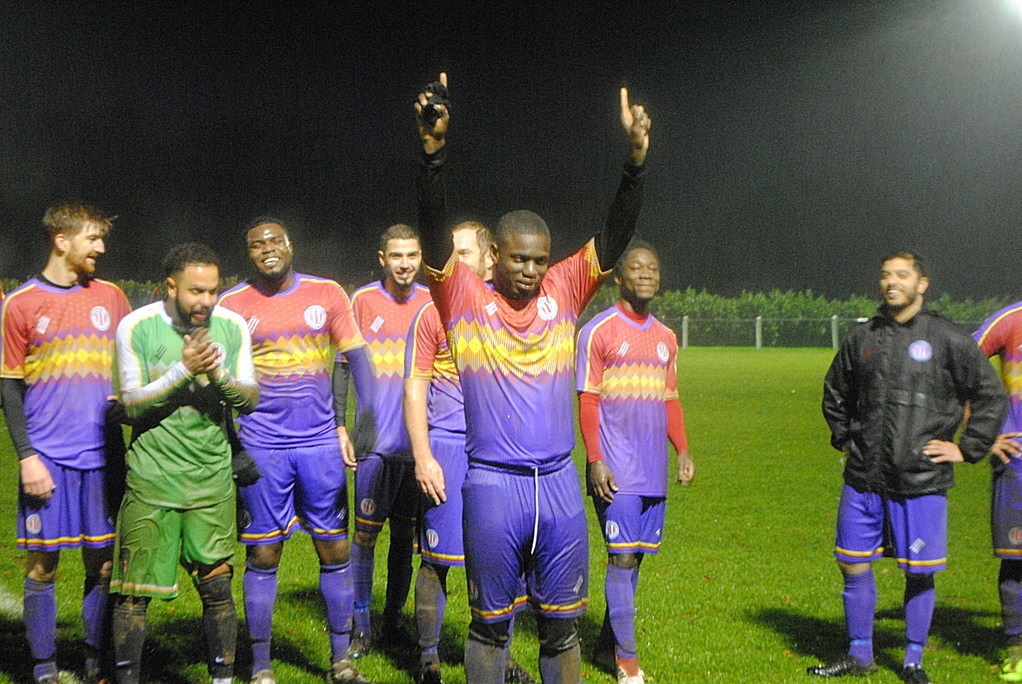 Clapton’s men’s side had played four away games in the league until last Saturday. All out in Very West London. Aside from a 2-2 draw against Hilltop, they have been seen off each time.

But this game against Polish-heritage side PFC Victoria, at Hanworth Villa’s Rectory Meadow ground, saw the Tons battle to a victory that continues their charge up the MCFL table.

The visitors kicked off with player-manager Geoff Ocran back in midfield and Sherwin Stanley continuing up front.

The conditions were – and this cannot be stressed enough – absolutely dreadful. For the duration of the game, the rain arrowed down on top of a slippery carpet of autumn leaf mulch.

But as we know, there are players on the Clapton team for whom slide tackling weather is the best kind of weather…

The hosts were the most threatening in the opening period and went ahead on 13 minutes. Kamil Wrobel extended a leg to guide a low corner into past Jack Francis.

But the lead was short-lived. Just a couple of minutes later, Dean Bouho utterly defeated a PFC attacker and played downfield to Stanley. The striker then scooped a delightful ball over the top of the Victoria backline. Julian Austin raced through and fired into the corner.

What a goal. What a player. The new Nathan Cook is what some fans are already saying.

Then Clapton went in front. A Bouho throw from a long long way away from the box made it into the box. Stanley shielded it, then chipped across the face of goal. Bilal Hussain was there to diving head the ball home.

Shortly after, PFC had a great chance to get back on level terms. Piotr Murawski was played in on goal and able to shoot from the middle of the box, unopposed. It was like a penalty from open play. He drilled at the bottom corner. Francis tipped it past the post.

And there was an even better save from the Tons goalie on 25 minutes. A well-worked Victoria move saw a winger fire in a low ball from the left. Murawski simply tried to guide it into the far corner. But Francis stretched to fingertip round the post.

Just after halftime, Victoria pulled back level. A vicious low cross came in from the right. Francis boosted out and managed to push it away from the first attacker. Unfortunately it then went to Murawski, who buried easily.

On 68, Clapton got back in front. A long range Ocran shot squirmed under the PFC keeper. With impeccable striker’s instincts, Stanley rushed in to force into the net.

Ten minutes later Francis made another good save from a well-hit long shot.

Then Ocran managed to get himself sin-binned. After a number of refereeing decisions that had gone against his men, the gaffer threw a frustrated hand up in the air. Not even a swear word. But it was enough to see him banished to the bench for ten minutes.

Victoria pushed for a leveller, but the ten-man Tons held firm. When Ocran came back on for the last few minutes, the three points were as good as guaranteed.

This was a game Clapton could very easily have drawn or even lost. PFC played a lot of good football. But winning matches that could have gone the other way like this is highly encouraging for the Tons.

They move up to sixth, in a league where every team has played a different number of games, making it difficult to tell what that means.

The most important thing will be to start to pick up points on the road to add to the home ones.

Jack Francis, Geoff Ocran and Julian Austin gave us their take on the game, in a moodily-lit interview shot in the stand of Rectory Meadow, against the backdrop of a poster featuring the words ‘Shut up and get on with it!’ and a terrifying set of teeth.

Two man-of-the-match awards in a row for Jack, just pipping Sherwin this time.