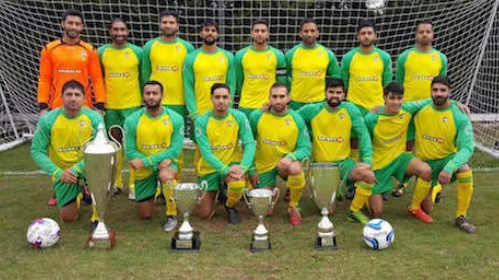 Indian Gymkhana was first established way back in 1916 as a cricket club. Since then hockey and football teams have been added, all playing at their lovely venue in leafy Osterley

The football section was created in the 1980s and now has a men’s, boys’ and girls’ teams. It was the first Asian football club in Britain to set up a girls’ team and they are determined to see girls and boys get the same opportunities.

Two years ago the men’s team won the Middlesex Intermediate Cup for the third time in their history while also losing in the final of the Alec Smith Premier Cup.

Last season IGC finished in sixth – still creditable but actually their lowest for five years. The campaign, however, ended in storming form with a series of big wins, including inflicting title winners St Panteleimon’s only defeat of the season of 5-0.

That form hasn’t carried over to this season as they’ve started sluggishly with just one win in the first six games, though last weekend they drew 2-2 away at Pitshanger Dynamo, where CCFC lost 2-0 this season.

Their one win was a 4-2 triumph over CB Hounslow United Reserves where all four goals were scored by Edward Simon in his only game so far this season.

Simon bagged 12 in 10 games last season, while strike partner Sukhvinder Singh Liddar scored 16 in 17, so there’s no shortage of goals in the team.

In contrast, CCFC have found scoring harder to come by this season without the services of Sherwin Stanley (cricket commitments and an injury) and Eliot Crosbie (work commitments), but have tightened up at the back.

It has not gone as well as we hoped. We haven’t been beaten convincingly and every match has been close. Whether it’s a mistake or a missed chance, we need to fix these into the coming games to start getting the wins.

Every season our aim is to win the league. But when you get off to a bad start, which we always tend to have, it’s hard playing catchup with the other teams.

So when that does happen, your just trying to finish as high up the table as possible and hoping the teams around you drop points.

We’ve heard about the community support from Clapton and it’s just amazing to see. You only wish more teams had the same so kudos to you guys!

We’re looking forward to welcoming Clapton CFC players and their fans to our wonderful club for the first time. Every team enjoys when they’re away to us and hope you guys too! But as with every game in this league, every game is a different challenge and we’re expecting a very tough game.

Getting to the ground is easy. It’s five minutes’ walk from Osterley Station, on Zone 4 on the Piccadilly Line. There is parking available too.

Admission to the game is free. Food and drink will be available to purchase.

Indian Gymkhana Club vs Clapton CFC is at their club on Thornbury Avenue, Osterley, TW7 4NQ is on Saturday, September 28th at 3pm.