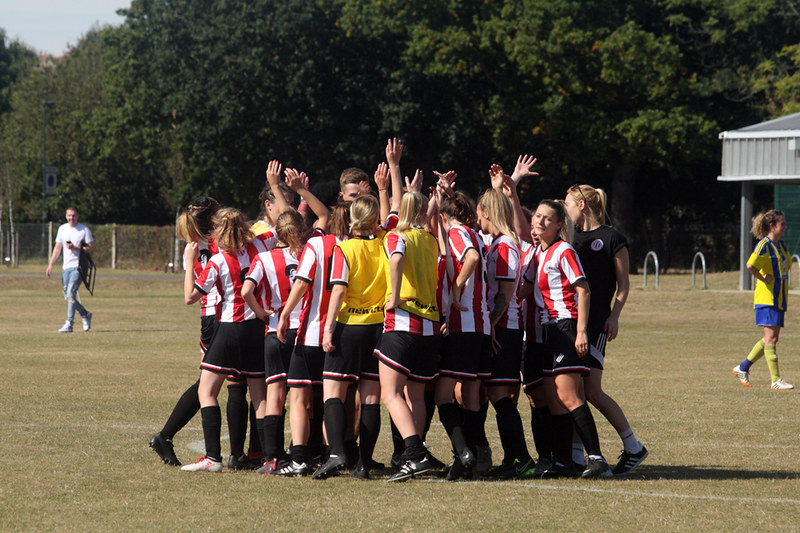 The sun was beating down on an unusually warm September day as Clapton travelled for their first away fixture of the league in South West London.

After a long journey over the river we arrived at Barn Elms Playing Field to face recently relegated Regents Park Rangers. However, dropping from the league above is not to be underestimated and we knew it was going to be a tough one.

The ref blew the whistle and we were off. We dominated the play but couldn’t quite get a handle of the game. Zhane and Ciara were up against it in midfield but put in challenge after challenge to win the ball back and look to play to the wings and provide the through ball for Naomi. However, it was not to be. Within 10 minutes Regents Park pounced on an opportunity that saw the ball float into the box and find the feet of an oncoming attacker. 1-0.

This was the wake-up call Clapton needed. The troops had been rallied. Still retaining most of the possession, Clapton won a few corners and kept forcing it down that end of the pitch. It was only a matter of time before Ciara struck a lovely ball across from a corner and Zhane hit home with a magnificent header. 1-1. We were back in the game.

There were spells of good play as the first half continued but it wasn’t the Clapton we have been used to watching at the Stray Dog. It felt unsettled, a bit messy and we just couldn’t seem to get the ball down and play our football. It was clear that Regents Park were definitely in this game. They were physical and commanding on the ball. They wanted a win too.

The second half started with a renewed sense of intensity, but the clinical and composed passing was still missing. The back four were kept busy, with solid performances from Annie, Phoebe, Laura, Harriet and Georgie ensuring that there was no joy for their striker. Our wingers put in a shift in the heat, giving options left, right and centre and some lovely build up play saw some opportunities, but nothing to really test the keeper.

As the game drew to a close, Polly was put under pressure from a deflected shot, but her safe hands meant that we weren’t going to give them a win.

An interesting day at the office for the team. A lot of effort on a hot day from all. Yes, we’d got a point, but ultimately, we knew we could’ve done better. We go away, we work hard, we come back stronger.