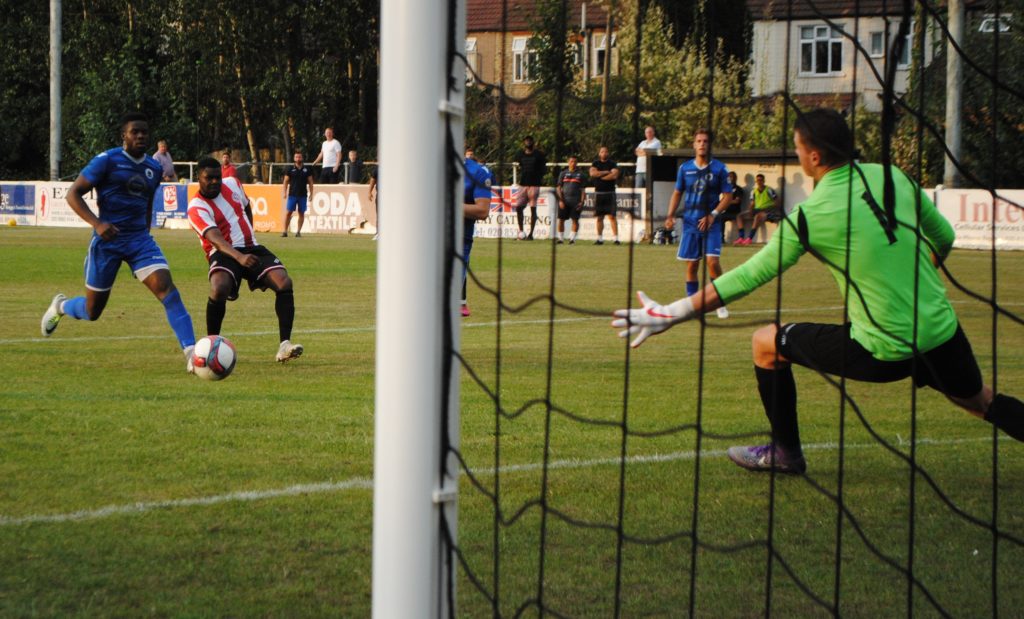 Clapton CFC men’s team squeezed in their first midweek friendly and ran a very strong side two divisions ahead of us agonisingly close.

Player-manager Geoff Ocran was able to call upon last season’s main attacking trio – Eliot Crosbie, Sherwin Stanley and Stefan Nielsen – for the first time in pre-season as his team starts to take shape.

Nielsen’s presence was perhaps surprising given he’s moved out of London now, but that wasn’t the only eyebrow-raising name on the list as proper Tons legends Fahad Nyanja and late addition Jerry Jariette made the bench.

It proved to be another high-intensity workout for the players, one day after training, and 36 hours before our lunchtime trip to Peckham Town, on the hottest day of the year.

They also threw in several players of the Ryan FC youth team, another Wadham Lodge based club, who are building up links with Walthamstow. None of them looked out of place.

In truth, Walthamstow had the lion’s share of the chances in the first half, but the defence held firm and Stanley hit the inside of the post (pictured at the top of the page) on the counter.

Second half proved scrappier with lots of subs for both sides, but after slipping 1-0 down to an Ollie Fortune header, Nielsen levelled the scores with a lovely top corner free-kick.

Walthamstow took the lead again through Steve Sylvester at close range, but Billy Wise almost levelled after cheekily nodding the ball out of Bransgrove’s hand. Then in the final minute, Nyanja’s shot rolled agonisingly across the goal but stayed out.

First half, very strong, competed well, not much in it. Second half with the wholesale changes you’re bound to get a few lapses in concentration but even then their goals were contentious.

It was great to have the Fab Three – Eliot, Sherwin and Stefan – getting minutes under their belt. Great free-kick from Stef to get us back in the game.

But again lots of positives. Fama Sangare again, Noah Adejokun on his debut, the squad is looking really strong. Selection will be a headache with 30 players vying for 16 places.

There wasn’t much between the teams. If you were watching you’d possibly say we looked a Step 5 team too. I think it’s good for our players to see the levels they need to consistently play at that level.

It was a good game which I really enjoyed. I didn’t put too much pressure of the boys for this one as my main objective was to blood the Ryan FC lads.

We finished the game with about 7 teenagers on the pitch and still managed to come away with a win so I’m happy and the boys should be proud.