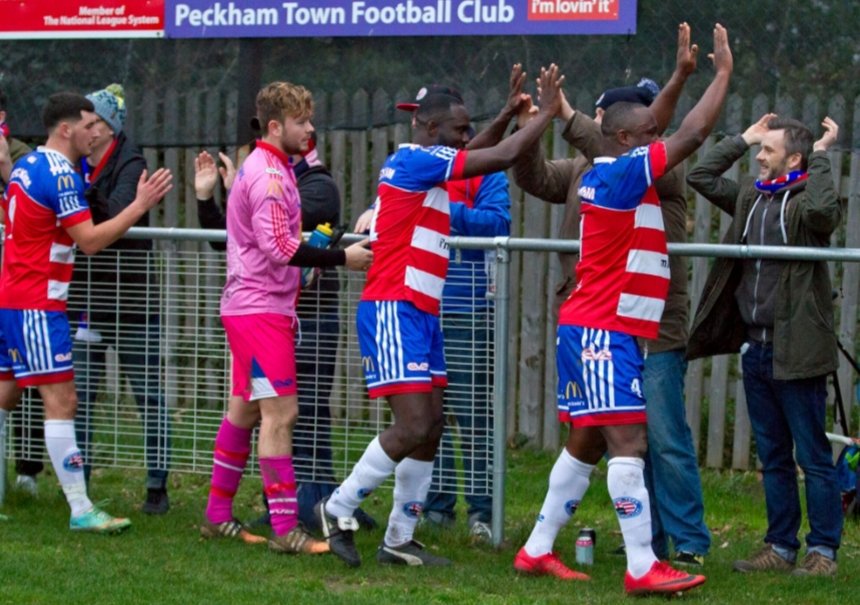 The Clapton CFC men’s team head to Dulwich on Saturday to visit one of London’s most community-minded, trailblazing football clubs for a tough lunchtime friendly test.

Peckham Town Football Club are also one of the best clubs at our own Step 7 level, and are tuning up for an all-out challenge for promotion having controversially missed out last season.

The Menace were founded in 1982 by 13-year-old Bryan Hall, who is still co-chair. He has also worked with around 20,000 youngsters over the last 13 years having set up an inter-estate football league. It’s been so pivotal in the South London area that Bryan was given the freedom of Southwark.

The club has grown and grown and now has men’s and women’s teams, kids teams from eight-year-olds and upwards, and even a full-time academy for boys aged 16 to 18,

Last season, Peckham Town finished third in the Kent County League, and were disappointed not to achieve promotion to the Southern Counties East League after getting planning permission for floodlights granted.

They do have a tidy little ground for this level, including a main stand, a terrace, a decent clubhouse and this, possibly the smallest stand in the country.

Their management team has been in place for years as they’ve risen through the leagues, with manager Alan Jacobs and Mary Philip – an ex-England captain with 22 major trophy wins with the Millwall Lionesses, Fulham and Arsenal – the head coach.

This will actually be The Menace’s first home pre-season friendly of the summer, after two previous games were called off. However, last week they hammered another Step 7 side Cowfold 4-0 away.

Clapton CFC have lost 3 of their 4 friendlies, including Thursday night against Walthamstow FC, but player-manager Geoff Ocran says the aim has been to get fitness, not results.

I’m happy with the way pre-season has gone so far. It’s very good to play Thursday and Saturday. Fitness is the main aim and we’re building that up. It’s about minutes under the belt and giving all players at least half an hour. We’ll be up and running, ready to go, when the season starts.

The nearest train station is West Dulwich, which is a 15 minute walk away.

Cans of local Brick Brewery beers and standard lagers will be on sale at the clubhouse.

There will be programme for sale priced £1.