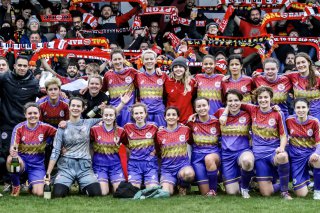 That means we will visit Sittingbourne of the South East Counties Womens Football League Division One East on Sunday, October 2.

Sittingbourne play their home games at Woodstock Park in the Kent town. They play at tier seven whereas CCFC are now at tier six after promotion

Last season the CCFC women’s team smashed all sorts of records, becoming the first tier seven side to reach the third round proper and the first side to beat a team four divisions above.

However, the run of five games was a major strain on the club’s finances and we had to launch a Crowdfunder to get the team to the third round tie at Plymouth Argyle.

With prize money for winning four games not even covering the cost of transport, and no gate money share from the 1750-plus fans at our games.

This season’s competition has seen the prize money increased so that success in the competition should no longer be a drain on any club’s resources.