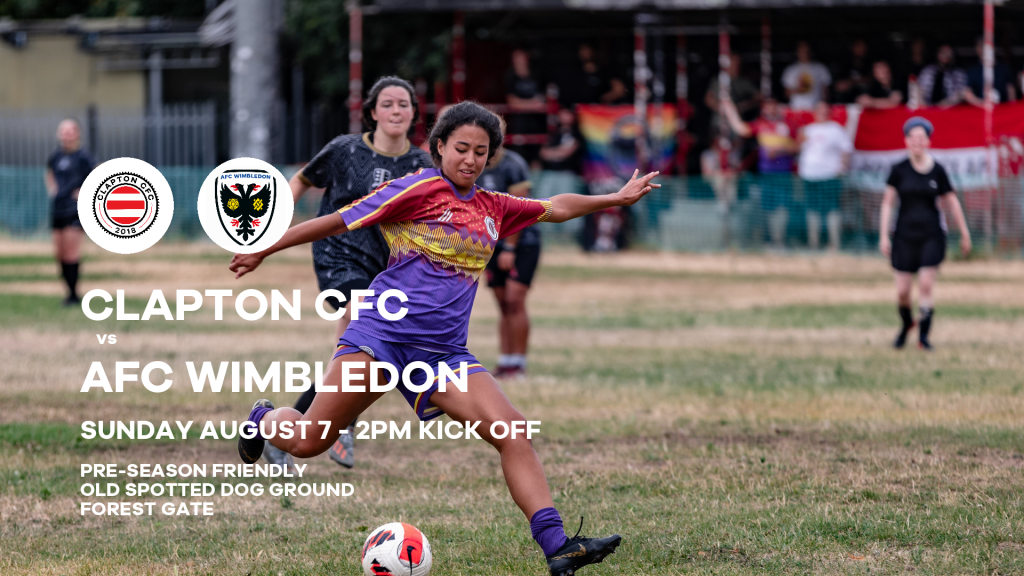 It’s Clapton CFC’s prestigious friendly of this pre-season on Sunday against higher opposition. Goalkeeper Sophia Axelsson explains why you need to be there…

For those who don’t know me, I joined CCFC when AFC Stoke Newington’s senior side merged with Clapton CFC before the 2019/20 season.

I immediately felt I found my football family. So I did what anyone who has too much time on their hands would do and got involved with various committees. In our second season I became the Women’s First Team General Secretary. And then I joined the board/General Organisation Committee. So you could say I’ve been involved in a bit in the women’s teams’ short history.

I’ve loved every minute of it though, so when a job came up on Women in Football which sounded more than perfect for me, I applied, and was very lucky to get it.

Everyone I’ve met at CCFC, players, coaches, volunteers, committee members, have taught me so much.

So because of Clapton Community FC, I now work for fellow fan owned club AFC Wimbledon, as the Women’s General Manager.

Some have dubbed it the “Sophia derby”. I call it an excellent opportunity to celebrate women’s football, to celebrate two teams trying to do things a bit different.

I’d love to see as many of you there as possible.

With songs, drums, noise, and above all, support for some incredibly talented footballers.

It’s donate what you want entry, no advanced tickets needed. For friendlies we suggest £2 for waged adults.

The bar will be open from around 12 noon until 6pm for soft drinks, alcohol and bar snacks. There is plenty of shade from the sun in the bar and the Scaffold.

Fusion Foods will be selling hot and cold food – meat, veggie and vegan options – and accept cards or cash.

There’s parking for bikes inside the Old Spotted Dog Ground too.

Parking is free on the streets to the north and west of the ground (e.g. Disraeli Rd) on Saturdays and Sundays. On Saturdays, parking is restricted on streets to the east and south of the ground (e.g. St George’s Rd and Upton Lane), but there are no restrictions on Sundays. Always check local signage for any changes. And if possible come by public transport, bike or walk.