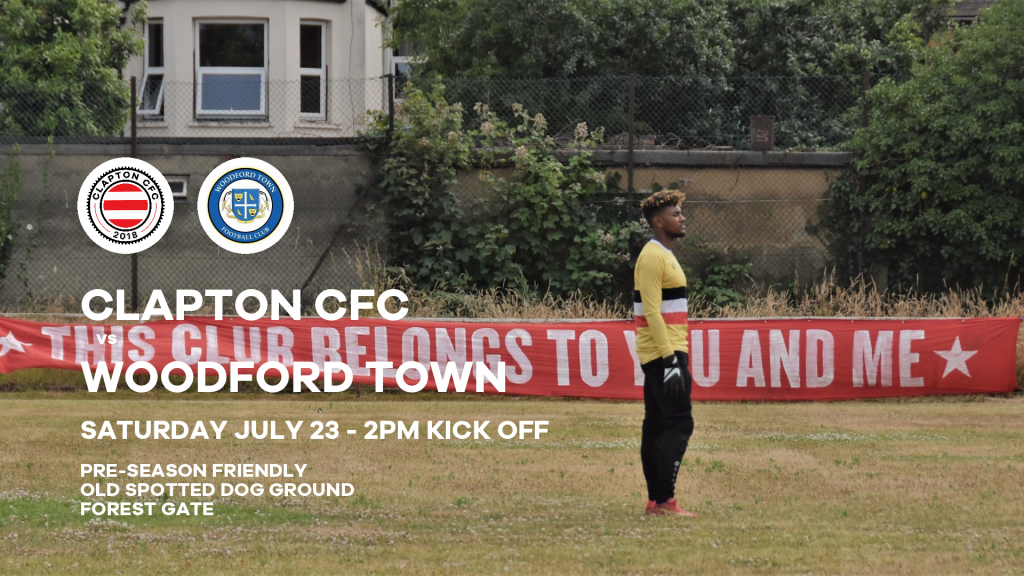 The Woods are two levels above, making them the highest placed opponents for the men’s first team since we faced FC United of Manchester last summer.

Player-manager Geoff Ocran‘s team have played four friendlies this summer, with line-ups dominated by trialists and a sprinkling of first teamers.

However, they pulled off a fine result last time out against newly promoted NW London in a 5-4 thriller.

Woodford Town have played friendlies against Step 6 sides Cannons Wood and May & Bakers as well as our Step 5 fan-owned friends Fisher FC.

Last season’s move to their own ground, Ashton Playing Fields, was transformative for Woodford Town, with average attendances rising from under 100 to over 300.

Their coach Neil Day is no stranger to the Old Spotted Dog Ground having been assistant manager for Clapton FC for many years.

It’s donate what you want entry, no advanced tickets needed. For friendlies we suggest £2 for waged adults.

The bar will be open from around 12 noon until 6pm for soft drinks, alcohol and bar snacks. There is plenty of shade from the sun in the bar and the Scaffold.

Fusion Foods will be selling hot and cold food – meat, veggie and vegan options – and accept cards or cash.

There’s plenty of litter on the streets and alleys around the Old Spotted Dog Ground. If you fancy helping to clear it up and being a good neighbour, we’ll be meeting.at 12 noon. Bring gloves.