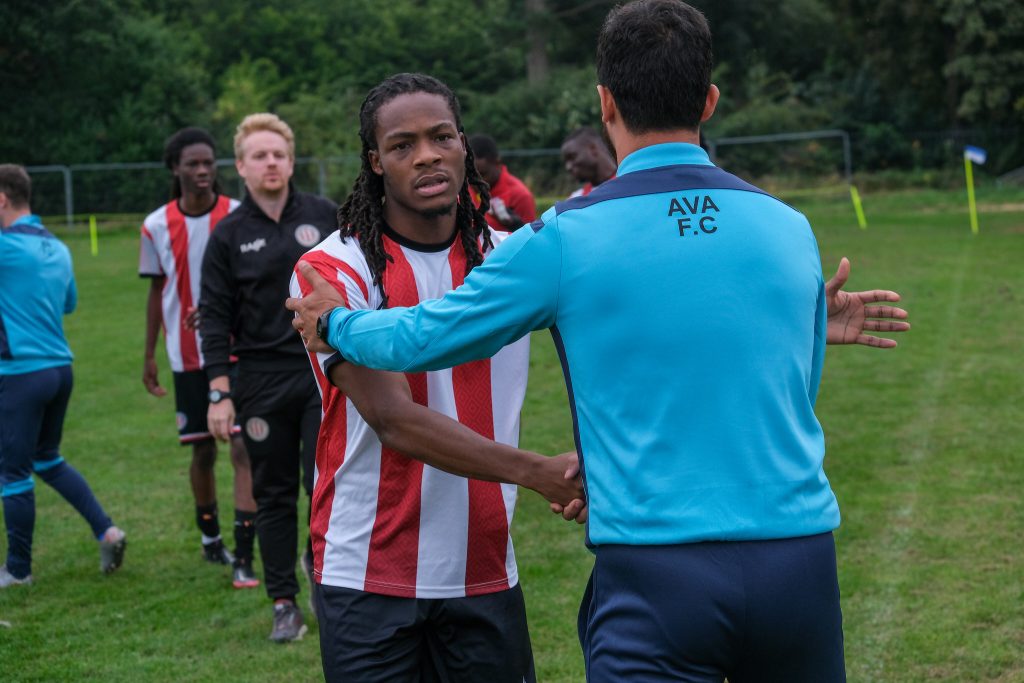 The Clapton CFC men’s first team are looking to bounce back to form with their final home game of 2021.

A draw and two defeats in the last three games has seen the Tons fall off the top of the division although we’re still firmly in the chasing pack.

It’s the day before the women’s first team game away at Plymouth Argyle, but we’re hoping Tons fans can turn up the noise and cheer Geoff Ocran’s team on to help them out of the sticky run.

It’s also a rare opportunity to see the team in the Wadham Lodge Stadium so come along and park your Christmas shopping and drinks until the week after.

AVA are a Romanian heritage side formed in 2016 as a youth football club by former footballer Adrian Avasâlcăi.

They added an adult men’s team in 2019 and in the last two Covid-19 affected seasons, they notched up a whopping 15 wins and just 2 defeats.

Unsurprisingly, the Middlesex County Football League decided to lift them up from Division One to the Premier Division to fill vacancies.

After a slow start, AVA won three in a row against Pitshanger Dynamo, Larkspur Rovers and Wilberforce Wanderers, proving they are more than worthy of a place at this level.

In our away game earlier this season, the Tons ground out an impressive 2-1 win thanks to brilliant individual goals from Noah Adejokun and Arthur Wright.

Top scorer Constantin Dron netted the AVA goal in that game, and has played division three football in Romania.

In 2019 AVA signed a partnership with the Gheorghe Hagi Football Academy, the first ever international partnership for the legendary former Romanian player.

Clapton CFC vs AVA is on Saturday, December 11 2021 at 2pm at the Wadham Lodge Stadium, Kitchener Road, Walthamstow.

Advanced tickets are not needed, you can just turn up.

Entry as usual is free but with donations on the entrance welcome, with a suggested £3 for waged adults.

We will have a mini programme available at the entrance too, pick one up for free.

Since 2015, Clapton fans have generously raised thousands for the long-running annual Newham Christmas Toy Appeal, and this year we’re doing it all over again.

We’ll be holding a bucket shake at half-time to help buy presents for up to 3000 children who would otherwise have nothing for Christmas.

If you can’t make the game but still want to contribute, you can donate online here.

Matchday Centres have asked us to ensure that there is no more use of pyro, flares, smoke etc on their property. This has caused damage to their facilities and complaints from staff, officials and neighbours.