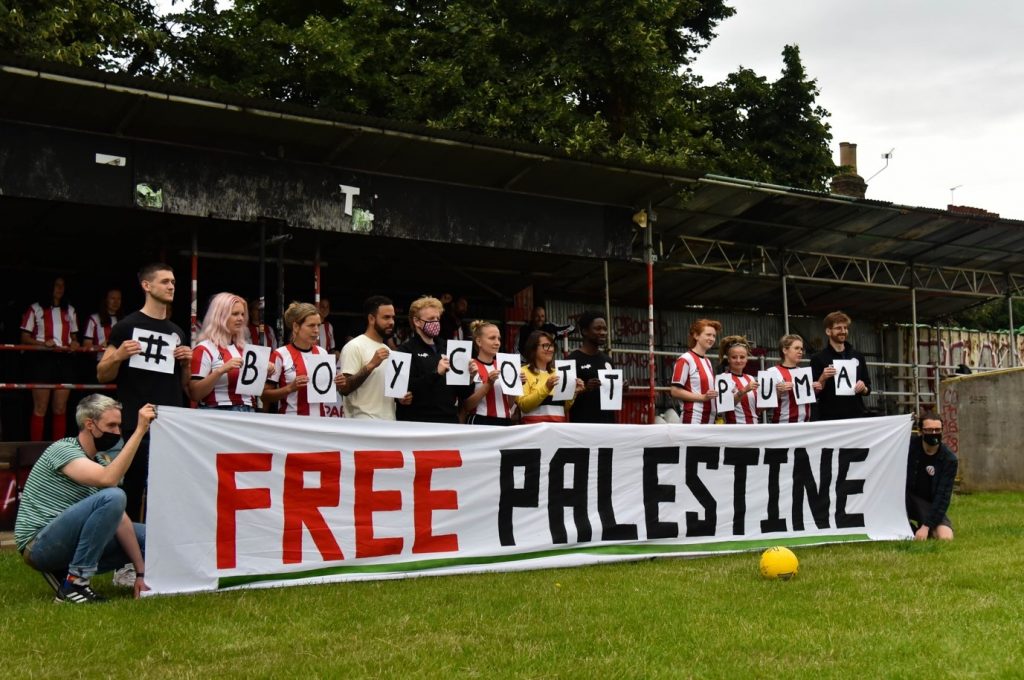 On Saturday, players from across Clapton CFC’s teams came together to mark the international day of action to boycott Puma. The global sportswear manufacturer sponsors the Israel Football Association, which. includes teams in illegal settlements in the occupied Palestinian West Bank.

We made history by becoming the first sports club in Britain to get apartheid free zone accreditation. Our members voted in favour of supporting a motion to support the Palestinian call for Boycotts Divestment and Sanctions (BDS) against Israel’s regime of apartheid and military occupation. We hope that other clubs follow suit.

Our players and teams are proud to take anti-racist stands and supporting Palestinians in their nonviolent struggle for liberation is one way we can extend our solidarity to oppressed people. We stand against all forms of racism and discrimination. We recognise that all our struggles for social, racial, gender, and economic justice and for self-determination are deeply interconnected and can only gain strength and power from mutual support and solidarity. For more information on the boycott of Puma please read the information here.

On the day, we were joined by the national Palestine Solidarity Campaign (PSC) and had support from Palestinians and the Palestinian Campaign for the Academic and Cultural Boycott of Israel (PACBI).

Sybil of PSC told our players:

As many of you will know, our solidarity at the present moment is more important than ever. Over the past few months, the Palestinian people have faced a renewed assault in the form of land seizure, expropriation and medical Apartheid, as well as a the complete repression of political, social, and cultural life in occupied Palestine.

Of course, this has been met with enormous resistance – on the streets of Palestinian cities, and in the refugee camps of exile, extraordinary rebellions have broken out. Palestinians, wherever they are, have risen up in unison against Israel’s attempts to destroy their existence in their homeland, and to maintain and expand their system of Apartheid and settler colonialism.

This has been matched by an outpouring of international solidarity, not least in England where over 200,000 people attended PSC’s London rally in May. The football community in particular, has shown again and again that they refuse to remain silent on the ongoing plight of the Palestinians. We know the power of actions like this one, we only have to look a few years back to the international boycott of Apartheid South Africa, to see what solidarity of this nature can achieve.

Today, on the 16th Anniversary of the global call to BDS, Clapton CFC has come together to show that we do not forget the Palestinian people, or their history, or Britain’s complicity in the violations of Palestinians’ human rights. Today, we say: “for as long as your struggle continues, you will never struggle alone.” . We stand in solidarity with their continued struggle for freedom, justice and to return to their homes.

The Community Outreach Committee would like to again say thank you to the Clapton Community Football Club members for helping us take an important stand against injustice. Forza Clapton and Free Palestine.