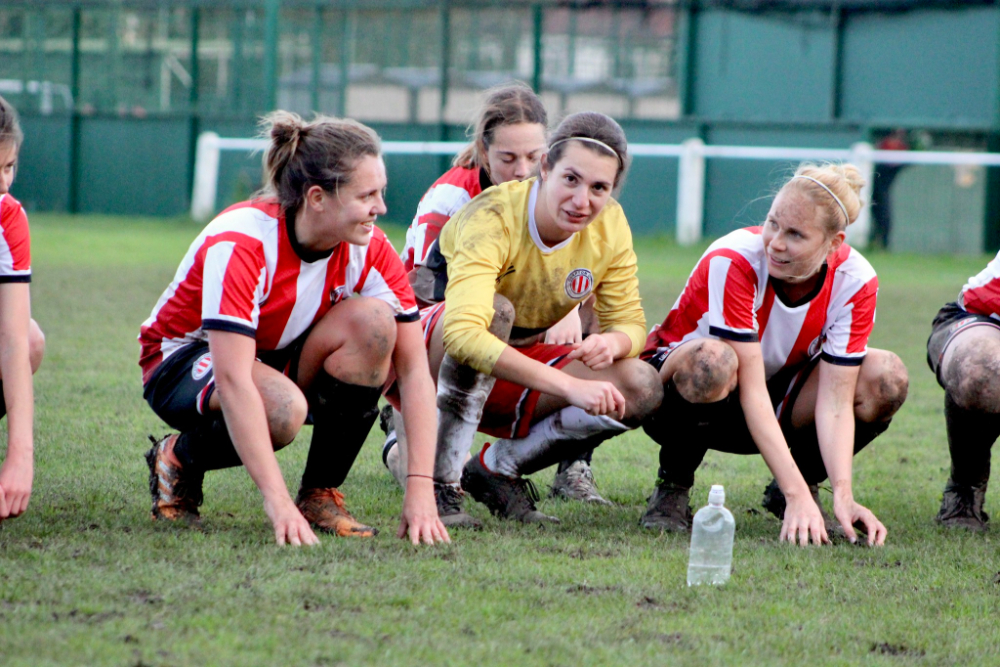 Football training and games will be allowed to restart from March 29th, as part of the first stage of lockdown easing.

Virtually all of our teams are due to resume soon afterwards, but it will all be behind closed doors.

The Beginners 5s are due to restart on March 30th; Flexi 5s on April 1st; Men’s Development on April 4th; Women’s First Team April 18th; and Men’s First Team on April 24th. The Young Tons and open training for women are also due to resume soon.

At the moment, no supporters would be allowed to attend any non-league games before May 17th. That means it’s possible that the rules would allow crowds for the final games at the end of May.

Our Covid-19 working group is running a members-wide survey to gauge opinions on both the return to playing football, and of any crowds.

The Greater London Women’s Football League 2020/21 season is due to restart after a large majority of clubs voted to carry on.

The women’s first team squad were polled and the majority wanted to restart so they voted in favour of the proposal too.

The league will be split into two, top and bottom, based on points per game averages.

It all starts for CCFC on April 18th and finishes on May 16th so as it stands the games are expected to be behind closed doors.

The Middlesex County Football League 2020/2021 season has been declared null and void. However, a replacement mini-league, the Middlesex Super 6 League, has been arranged instead.

The Tons will take on five other teams in a behind-closed-doors tournament across five weeks.

The MCFCL Premier season had barely started when it was stopped, with the Tons having played just 4 of 26 league fixtures, and several clubs told the MCFL they either couldn’t and didn’t want to continue.

Player-manager Geoff Ocran and his squad indicated they could carry on with the league season, but would prefer a separate, mini-cup competition, which has now come to fruition.

The squad voted overwhelming in a poll among themselves to play in the tournament.

The Essex Premier Cup has been abandoned, meaning the trip to Billericay Town to face their U23s won’t happen.

All levels in the men’s non-league pyramid from Step 2 down to Step 6 were abandoned by the FA.

CCFC play at Step 7, where it was left to the leagues themselves to make the call. Most have chosen to end the season and play shorter cup competitions instead.

On a separate note, the FA have given no indication whether their restructure of the men’s pyramid will take place after being delayed once last year.

As part of this, additional clubs may be promoted from our level to fill spaces in the divisions above, rather than just one.

However, the Tons are set to move into the Old Spotted Dog next season, which still requires work on changing rooms and pitchside fencing.

As it stands, we would not pass the ground grading for Step 6, and therefore we expect to start the 2021/2022 season in the MCFL once again.

The women’s development team’s season has been officially ended.

A statement by the Clapham Women’s Saturday Football League said: “We have been left with no choice but to void the 2020/2021 season as there is insufficient time to complete outstanding fixtures.”

The proposal is for all teams to play each team once, rather than twice, which would involve nine games taking us up until the end of May.

All instances where teams have played each other twice have been declared null and void, which includes our games against Bow Badgers – 4-2 and 4-1 wins. So we will need to play and hopefully beat them a third time.

That means our only result that stands is the 3-2 defeat to Athletico DFZ.

The 5s League is restarting as soon as possible, with the Beginners 5s on Tuesday, March 30th and the Flexi 5s on Thursday, April 1st.

This is proposed to resume on Saturday, April 3rd.

The Young Tons are speaking to coaches and parents and looking for a swift return to training sessions.