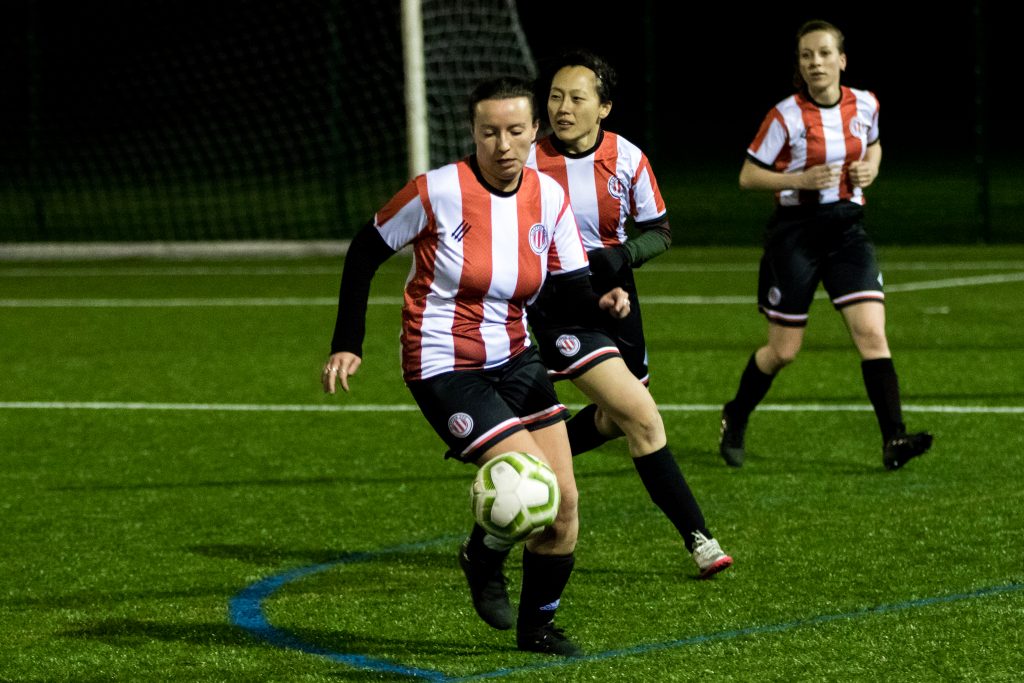 Clapton CFC 5s were finally defeated by a Mundial side that were motivated and organised.

Unbeaten and at the top of Super5League every opponent was now treating a game against the Tons like a Cup Final.

Without Jess Loughnan in defence, coaches Ellie and Julie shuffled the pack and Rhianne Wright took up defensive duties.

Meg became the latest CCFC debutant, coming into the side from the Tuesday Night training sessions for women and non-binary people.

Mundial resolved their selection problems by drafting players in from their Intermediate team. Perhaps they are the antithesis of nominative determinism?

But no excuses were needed as The Tons pressed forward with Maylea Ma on the left and Gabriella on the right supporting Chelsie Sparks running through the centre.

Chances were in short supply as both teams marked and closed down efficiently, Annabel Staff protected the net from any long-range shots and found distribution tricky against the Mundial press, but used a combination of throws and long kicks to put Tons back on the offensive.

The first half ended scoreless with both teams cancelling each other out.

Surely the deadlock would be broken with something special?

Unfortunately, the script had other plans and Mundial went ahead with a fluky own-goal, a shot at goal was stopped by a Rhianne header in front of Annabel in goal and agonisingly the wind assisted the ball over the keeper and into the net.

Clapton pushed forwards for the equaliser with Lucy Rankin coming off the bench to add extra resolve and direct running to the attack.

Mundial held firm, packing the defence, blocking and tackling efficiently.
The second goal was always going to be vital and a long ball into the Clapton box was cleared by Annabel but lobbed back over into the net to double Mundial’s lead.

The Tons did not give up and a late effort beat the SCdM’s keeper but not the post and the scramble was saved.

Defeated but not disheartened this Tons team talked about lessons learnt and resolve stiffened. We look forward to the next game when we go again.