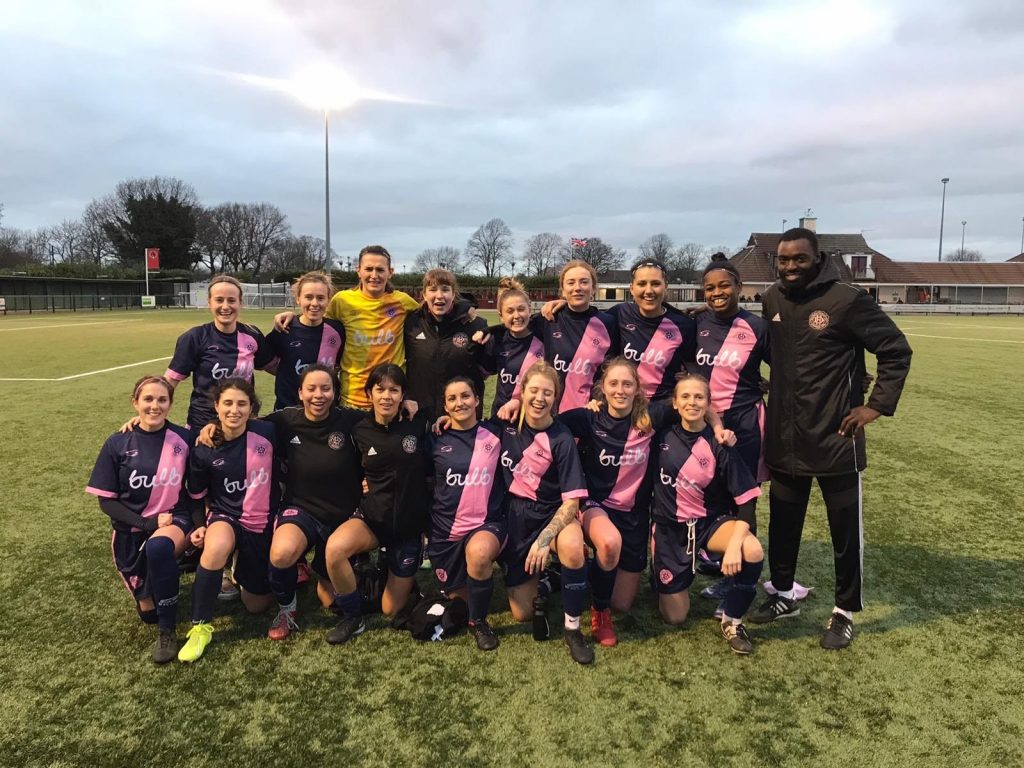 Our women’s team has prepared for the away fixture twice before, only for them to be postponed twice due to waterlogged pitches.

To avoid a third-call off, we’ve switched this home game from the muddy Stray Dog to the adjoining 3G pitch at Wadham Lodge instead.

But don’t worry, spectators are very much welcome and we’ll make it as homely as possible for our first women’s team home game in two months.

This will be the first time in over 25 years that any sides representing Dulwich Hamlet and Clapton meet.

Dulwich Hamlet Reserves currently sit in fourth place in the league on 19 points, having won 6 and drawn 1 of the 11 games they have played so far.

Their campaign started out rocky, waiting until November for their first win, away against Islington Borough.

Since then, they have won all of their games except one. They have bested Comets, Hampton & Richmond Borough, Brentford, Luton Town Reserves, and most significantly, high-flying Crystal Palace Development.

The only team which has managed a win over Dulwich since October is Regents Park Rangers in the final game before the Christmas break.

Those who’ve followed our women’s team this season will know that the Tons drew against Regents Park Rangers in our first away game.

So although the Dulwich Hamlet Reserves are one of the most in-form teams, they are not unbeatable, something CCFC will want to remember when they enter the pitch.

Our five league games before Christmas were all postponed so, after 56 days, our next game was a long trip to Walton Casuals.

Given the break we’d had and the strength of the opposition we gave a good account of ourselves.

Eventually we lost 3-1 but kept the game incredibly close until about the 80th minute.

Unfortunately, in our last game, away in Clapham against Comets we didn’t meet the standards we expect of ourselves, despite a positive start.

We’ll look to put that right against Dulwich who started the season slowly, partly due to calling a number of games off in a row in October.

Since then they’ve been one of the better teams in the league, so it’ll be another tough test but one we’ll relish. Enjoy the game!

The Dulwich Hamlet women’s team story begins almost 10 years ago in 2010 – under the name AFC Phoenix.

Rising from a Saturday morning academy and friendly team, AFC Phoenix was a self-funded, fully independent and exclusively women’s club that worked its way up the football pyramid.

They made it to the London & South East Regional Women’s League (Tier 5) after a title-winning 16/17 season, with the reserves now playing in the Greater London Women’s Football League, Div 1, after a league winning season in 17/18.

After two consecutive second place finishes and cup finals and wins across both teams, the decision was made to merge with an existing men’s club that matched the ethos and ambition of AFC Phoenix. Enter Dulwich Hamlet.

Fusion Foods will be there selling hot food. They will have meat, veggie and vegan options and accept cards or cash.