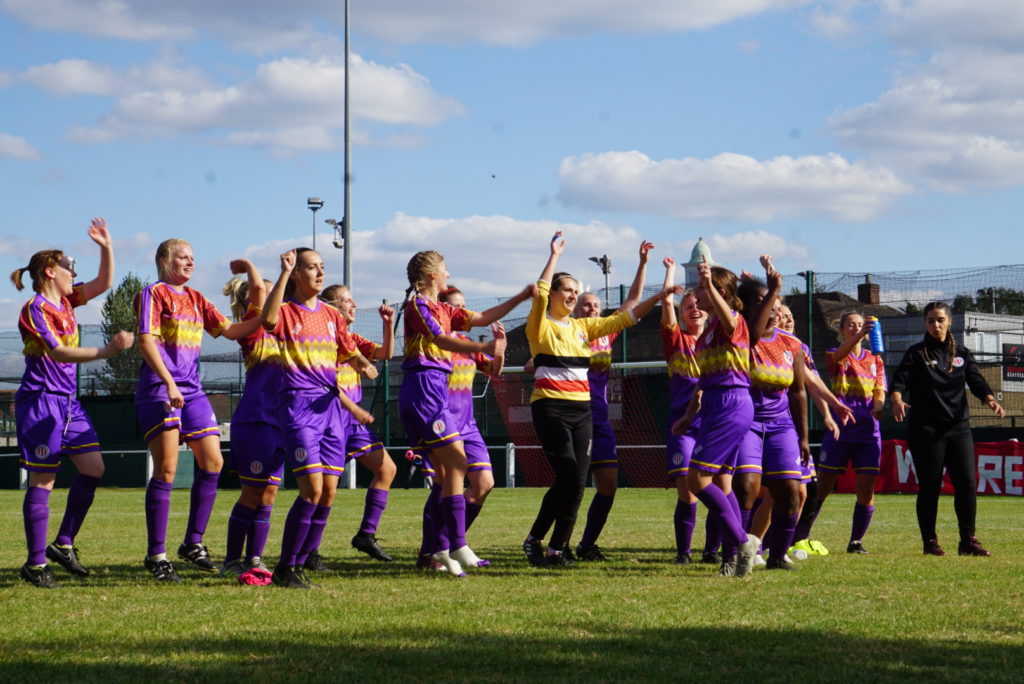 Match report by this game’s left back, Saskia Walker:

With an FA Cup and two pre-season victories under our belts, it was time for Clapton CFC Women to make our mark as the new kids on the block in our first Division One league match.

Taking on a fresh faced Luton Town Reserves, pre-match anticipation and spirits were high as we knew the importance of getting our league campaign off to the best possible start, while also ensuring we put on the kind of performance the loyal Clapton supporters have come to expect!

As always, the sun was shining at the Stray Dog as we took to the field in our first outing of the iconic Clapton away kit. The starting XI saw some changes from the previous week, with myself and Laura Wright dropping into defence and Naomi Scriven making her Tons debut at right wing.

It was clear from the first whistle that the (few) extra years that we collectively had on Luton did not come at a detriment to our game and instead, was expressed through a calm and controlled poise on the ball, as the likes of Ciara Monahan kept our wingers well serviced who were beating Luton for pace every time.

It came as no surprise then that the deadlock was soon broken by our own pocket rocket, Ana Holmes, whose determined run from the left proved too much for the Luton defence as she slotted Clapton’s first league goal past the keeper with pace and power.

Luton were by no means down and out and had moments where they demonstrated the kind of play that saved them from relegation last season. However, they caused no real problems for the likes of Georgie Brophy and Phoebe Parthews who ran a tight ship in the centre of defence.

In order to combat any potential mid-half slump, Zha Amoaten and Lucy Rolington were brought in off the bench. Both hit the ground running with Luton unable to deal with the quick feet of Amoaten or the high energy of Rolington.

Clapton coach Patrick McLaughlin has continued to impress upon us the importance of being confident in playing out from the back, something which we certainly capitalised on in this game. Our second goal came from an excellent team move which resulted in the ball finding the feet of Scriven, whose expert cross led to Holmes putting away her second of the game and leaving us 2-0 up at the break.

Going into the second half the message was clear – slow the game down and make sure we didn’t have any lapses in concentration that Luton could capitalise on. Much like the first half, Clapton appeared firmly in control with Monahan and Amoaten proving a formidable force in the centre of the park.

After taking a bit of a knock, Ana Holmes came off and was replaced by Becks von Blumenthal who slotted into the left wing. Emily Link, who had run the Luton defence ragged, also came off for Scriven who was now playing up top.

It didn’t take long for the lightning pace of Scriven to result in our 3rd goal after a 30 yard run left the Luton defence scrambling.

It appeared now that the 3 points were well and truly in the bag but just to be sure, Scriven drilled home her 2nd of the game and Clapton’s 4th. The only thing more impressive than her goal was the triple backflip that she executed as part of her celebratory routine.

Polly Adams had been largely untroubled between the posts the whole game, but not wanting to feel left out, she made an excellent fingertip save in the dying minutes of the game to push Luton’s free kick attempt from outside the box over the bar and secured her clean sheet.

Spurred on by the supporters’ chants about airports, I think it is safe to say that Clapton’s first game in Division One has proved just how far we have come as a team and that we will hopefully be a force to be reckoned with.