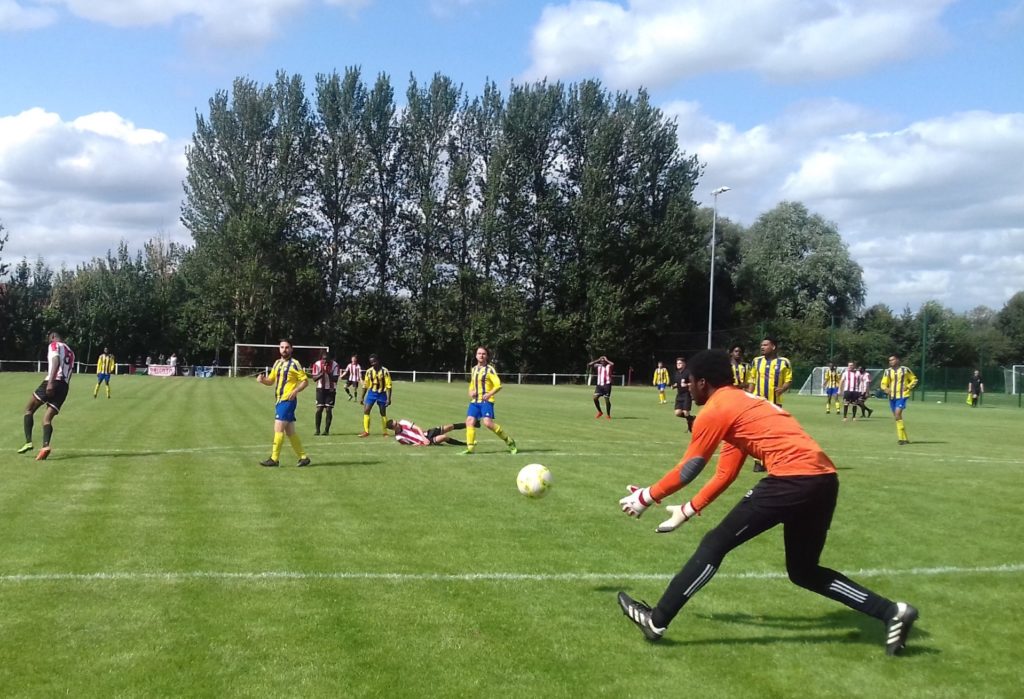 The new season finally gets underway for the Clapton CFC men’s team as they step up to the Middlesex County Football League Premier Division.

The opposition for our double-winners’ debut at this level come in the familiar form of Sporting Hackney on Tuesday night under the Wadham Lodge Stadium floodlights.

As well as being the only other team in the MCFL Premier to play in East London, the Parrots have already taken on the Tons twice.

Last pre-season, the men in red and white triumphed 4-2 at Mabley Green, to secure their first ever win.

But this July, Sporting had their revenge, beating the Tons 2-1 at The Stray Dog. Bogdan Panescu grabbed the consolation from the spot on that day.

The Hackney Marshes-based side have been on the go for over 20 years and finished eighth in the league last term and after being hampered by injuries to key players.

However, with some impressive new additions to squad over summer, they are aiming for a title challenge. But the season got off to a disappointing start on Saturday, with a 3-0 defeat away to Pitshanger Dynamo.

Thoughts of the gaffers

CCFC player-manager Geoff Ocran gave us his take on the long-awaited season opener:

Our focus returns to the league and due to fixture congestion, our first league game is now against Sporting Hackney under the lights.

We both had a chance to do some homework in our pre-season friendly so I envisage a very competitive game in midfield where we hope our front three will make the difference.

It’s been a long pre-season and we are ready to get the season underway. I’m sure our fans feel the same with a great weight of anticipation as we step into the unknown of a new league.

Parrots manager Peter Harrington is confident of an improvement on last term:

Pre-season at this level is always frustrating with players away on holiday. I always feel that squads do not really settle until September.

However, I have managed to retain 16 first team players from last season with only three players moving on for various reasons.

I have been really pleased with our new signings. Three of them played against Clapton and they have certainly fitted in well at our club. In total we have played four pre-season games winning three and losing one. So that has been positive but we must remember that nothing is like a competitive league game.

Like all seasons in the MCFL, it will be difficult to predict the winners with so many new clubs joining. I will be looking at PFC Victoria to be strong again this season as well as Pitshanger.

If we stay injury free (unlike last year) we will be there or thereabouts. We’ll certainly be challenging. But like all seasons it is imperative to get off to a good start, especially with 32 games to play.

We have a range of merch on sale as well as our matchday programme, with this issue’s cover designed by From 12 Yards.

The Wadham Lodge Stadium is about 20 minutes walk from Walthamstow Central station. Turn onto Hoe Street and follow the road all the way along (past the junction with The Bell pub) until Chingford Lane. Continue past Sir George Monoux 6th Form College and take the first right onto Brookscroft Road then left onto Kitchener Road.