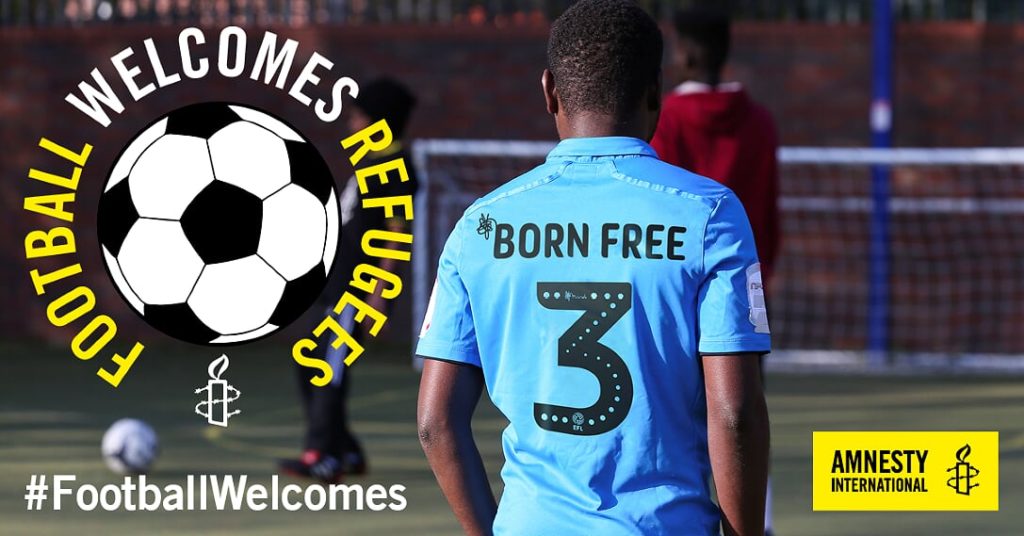 Clapton CFC are delighted to take part in Amnesty International’s Football Welcomes 2019, celebrating the contribution of refugees to the beautiful game.

From the children fleeing the Spanish Civil War in the 1930s who went on to become some of the first refugees to play professionally here, to the likes of Granit Xhaka, Nadia Nadim and Victor Moses, refugee players have been making their mark on football for decades.

For many refugee players, football has helped them to adjust to a new country and culture as they and their families rebuilt their lives in safety.

In partnership with our friends at the charity Crossworld FC, we will be helping to celebrate and raise awareness of football’s role in promoting integration and creating a welcoming environment.

Some of the Crossworld FC team came to our game against Chipperfield Corinthians in February to shake a bucket to try to tackle their funding crisis which left them in danger of not being able to finish the season.

We happily helped to raise £350 that day for Crossworld FC, which uses football as a means of empowering young people from refugee and asylum seeker backgrounds.

On Saturday Crossworld FC will be back to help us mark Amnesty’s Football Welcomes event, which sees clubs from the Premier League and Women’s Super League to grassroots clubs like ourselves putting on events and activities to welcome refugees in their communities.

“Football clubs are at the heart of their communities and it’s great to see teams across the UK using the international language of football to create connection, respect and friendship across cultures.

“With so many people across the globe forced to abandon their homes due to conflict and persecution, it’s important that football clubs use their platform to send out a clear message: refugees are welcome here.”

Football Welcomes is part of Amnesty International’s ‘I Welcome’ campaign for a better international response to the global refugee crisis.

The campaign encourages local communities to work together to create a more welcoming environment for people fleeing conflict and persecution.