The league title could be decided this Saturday.

Clapton will be hosting London Samurai in the big game at the Stray Dog.

At the same time, Stonewall are away at Eastfield. There will be many in Walthamstow with a keen interest in how that one progresses. 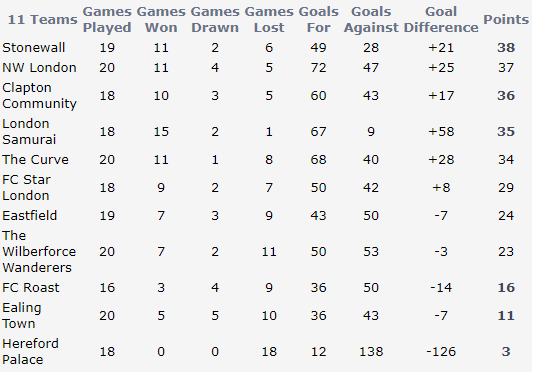 So who will triumph in this three-way title tussle?

Clapton are champions. This is our favourite outcome.

Clapton go level with Stonewall at the top, but behind on goal difference (barring a five goal swing). The Tons would only need a point against FC Roast to clinch the title.

Clapton can win the league by beating Roast. Anything less and Stonewall are champions.

A win against Roast and Clapton are champions.

A draw for Clapton vs Roast would give Samurai the chance to top the table with a win against Star. If Samurai failed to win, Stonewall would be champions.

Samurai only need a point against Star. However, if they lose and Clapton beat Roast, the Tons come out on top.

Samurai need a point in their last game against FC Star. If they lose, Stonewall win the league. 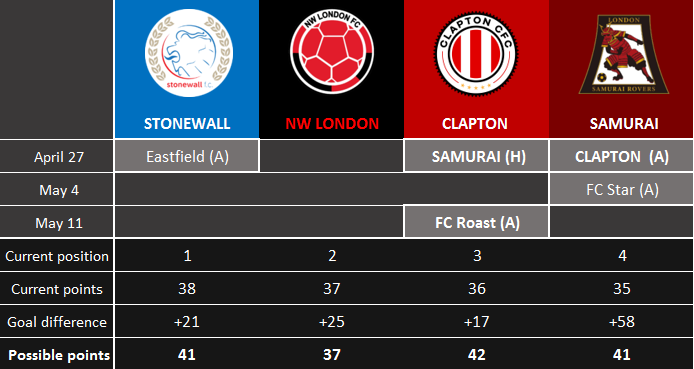 Clapton need to beat Samurai to keep it in their own hands. A draw is only useful if Stonewall slip up on Saturday.

If Clapton lose, they would have to pray for a Stonewall defeat at Eastfield and Samurai losing to Star to be in with a chance.

Now read our in-depth preview of the big game against London Samurai.