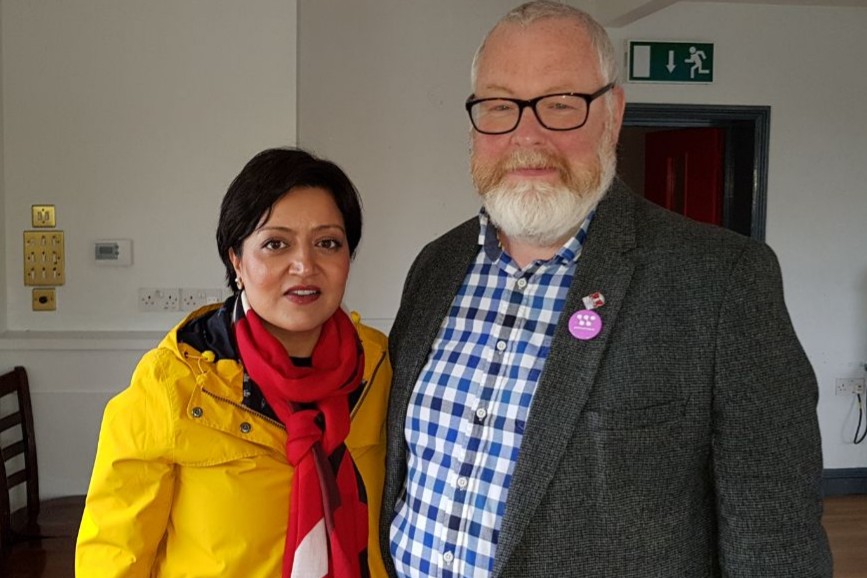 Clapton Community FC members were delighted to welcome the mayor of our spiritual home borough of Newham to our game on Saturday.

Rokhsana Fiaz OBE, who has enacted major change to Newham politics in the six months since being elected, braved the rain in Walthamstow and was treated to an eight-goal thriller.

She was joined at the game by councillor Paul Douglas, who is Waltham Forest’s cabinet member for sports development, and whose local ward takes in our temporary home at the Stray Dog.

Rokhsana, pictured above with Councillor Douglas, spoke to us after the game and said: “It’s been awesome, it’s been really amazing.

“The sense of family, community, camaraderie has just been really impressive. I love the songs that everyone sings. The appropriation of the Cindi Lauper song Girls Just Wanna Have Fun I found really funny.

“And just the excitement and the drama of the game though I do want to ask the team ‘what happened there lads, from a 4-2 position to 4-4. Come on!’

“To have 250 fans come out on a rainy Saturday for this particular type of league is just phenomenal.

Had a great afternoon watching @ClaptonCFC over at their temporay home that is the Wadham Lodge sports ground in Waltham Forest! Well done to the team for a riveting match vs. @fcroast1 👏🏽 & here's to welcoming them back home to Newham where they belong – because they are Family! pic.twitter.com/lejdfCTzEM

When we talked about the dream of being back in Newham, Rokhsana said: “I want you back. Whatever I can do as mayor of Newham to support the endeavour to bring you back home.

“I’ve also said once you commence your women’s team, despite being very old now, count me in!”

Rokhsana added: “Serving the community is very much apparent in this community football club and it resonates with me because we clearly share the same values and we’re all about reviving that community spirit.

“But also on those fundamental issues like challenging racism, you’ve always been on point. So thank you for everything you do.”

Rokhsana said: “Let’s have a proper conversation with council officers about various issues.

“I’m happy to support your endeavours to maintain the pressure to get the ground in Forest Gate back where it belongs, at the heart of the community.”