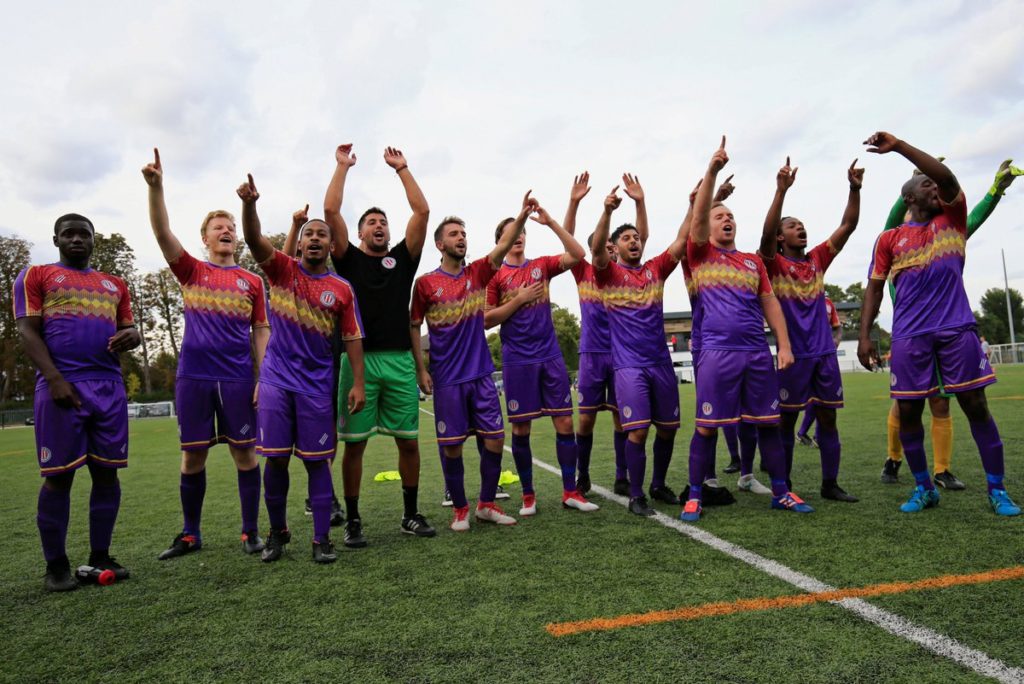 After an historic win in their first competitive game, CCFC look to keep their momentum going with a win against Hutton FC in the 1st round of the BBC Essex Premier Cup.

The Tons first competitive home fixture kicks off at The Stray Dog this Saturday at 2pm. If it’s level after 90 minutes, it will go straight to penalties.

One of the largest clubs in Essex and established in 1928, opponents Hutton FC have grown from humble beginnings, most recently merging with local youth club Hutton Medway in 2005

It currently fields a massive 60 teams, with over 600 playing members from 5-50 years of age. By our calculations that means 0.8% of the entire Brentwood population play for this lot.

With a strong ethos of developing youth talent, their senior men’s team finished runners-up last season and were promoted to the Essex Olympian Premier, which means they’re one step above the Tons in the football pyramid.

Although we face higher placed opposition, Clapton CFC are riding high following a second half comeback last week, coming from a goal behind to beat Ealing Town 1-2.

Missing some international players due to clearance issues, Clapton trailed into the second half, until a flurried five minutes of action saw goals from Man of the Match Liam Smyth and Paul Oshin, turning the game on its head.

In an end to end second half, saves from Dan Anfossy kept the Tons noses ahead until the full time celebrations broke out.

Man of the match vote…

Form-wise, Hutton are sitting mid-table in the Essex Olympian Premier after starting their season brightly with two wins over Bishop’s Stortford Swifts and Manford Way.

They have struggled in more recent fixtures though, with two consecutive defeats including a 1-5 home thrashing from EOFL high flyers Kelvedon Hatch last Saturday.  They will be looking to stop the rot with a cup win against the Tons.

Amongst the Hutton players is a familiar face for long-time Clapton fans.  Midfielder Danny Aggio played for the Tons over two stints in 2012 and 2014.  We caught up with him ahead of the game.

What have you been up to since leaving Clapton?

I decided a few years ago to have a break from senior football. Travel and work commitments made it difficult, but I’ve enjoyed the last few years playing for Grove United, with a few former Clapton players, and last season at Hutton.

What players from that time are you still in contact with?

At Grove United, I played alongside some Clapton old boys. Neil Matthews, Jamie Pooley, Sammy Naylor, Harry Chalk, Bill Rungay and Johnny Hughes were regulars. We rolled back the years and managed a couple of promotions and a couple of cup wins. I’m still in contact with a few of them and I occasionally bump into a couple of other Clapton boys, Craig Greenwood and the new gaffer, Geoff.

What are you biggest memories of that era of Clapton?

In my first stint, I remember games where we had one man and his dog watching. It was a struggle, but I remember progressing in the FA vase and getting on the scoresheet. This was a decent result given our preparation – one of the lads broke down on the M25 with the kit and three other players. Following a whip-round from the players and coaches, a taxi delivered the kit and the rest of the squad minutes before we would’ve had to forfeit the game.

In my second period, one memory that stands out is getting sent off for a cynical foul against Ilford. Having got sent off and given a penalty away, I wasn’t expecting the warm reception I got as I left the field. Luckily, they missed the resulting penalty and we hung on for the win.

How long have you been with Hutton?  How has the season gone so far?

This is my second season, but Hutton is where it started for me at age five.

We had a decent pre-season, but it’s been a mixed bag since the season started. Two decent performances where we’ve looked very good and two where we’ve not been at our best and been well beaten.

What are your expectations/objectives for the season?

Getting promoted last year, I think our priority is to stay in the league. Once we get the points on the board we can look to push up the league. With the squad we have we, we should achieve that and hopefully a decent cup run.

If you’re coming to The Stray Dog for the first time and are a bit unclear of how to get there, let us guide you!

The ground is about 20 minutes walk from Walthamstow Central station, going past at least 5 pubs along the way.

The toilets and bar – selling draft and canned beers and more – are in the main building in the car park. We’re on the pitch just left as you enter the car park. Everything will be signposted.

At the entrance to the ground we’ll have the programme (£2) and our merch stall (but no stock of the replica shirts, unfortunately).

Entry is completely free (but feel free to donate if you wish, suggested £3 for waged adults),.

Bring your spare food stuffs! As we‘ll be holding our first foodbank collections for local, Walthamstow-based Eat or Heat.

Eat or Heat are a brilliant community organisation, so if we could give a big boost to their stocks it would be a great way for us to start life in E17.